Moving on, and in, with Uncle Sam's help

America’s biggest move is taking place today, and I’m not just talking about Dubya handing over the keys to the Oval Office to Barack Obama. 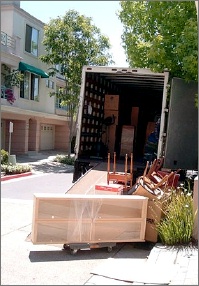 There’s an actual move of personal belongings going on, too, just like the process that millions of us experience each year.

Of course, POTUS 43 and 44 and their families are finding that getting their stuff out of and into 1600 Pennsylvania Avenue is a lot easier than previous moves. People are at their disposal to take care of every relocation detail and in record time.

The complete transfer takes around five hours. In years when occupants change, on Jan. 20 a moving crew of 95 starts work around 10 a.m. and goes until mid afternoon when the Inaugural Parade ends, taking the departing president's stuff out and bringing in the new items.

Obama furniture will be in its proper place, thanks to floor plans and the oversight of the White House Usher's office. Belongings will be unpacked and placed in cabinets and closets. And by the time the new First Family gets to their new, bigger home later today, all the bubble wrap and empty boxes will be gone.

If only it were that easy for the rest of us!

Covering the costs, with Uncle Sam’s help: Both the Obamas and the Bushes have to pay their own moving costs. And this is where you and I get a bit better tax break than do the form and new leaders of the free world.

When you move for  work-related purposes, in many cases you can write off those costs.

The tax break for moving expenses is relatively easy to claim. It's right there near the bottom of your Form 1040. The nice thing about its location there is that you don't have to itemize to claim this deduction.

If you do itemize, that's OK, too. You still can take this above-the-line deduction, so called because it's part of a group of tax breaks on Form 1040 that appear just above the line where you enter your adjusted gross income.

But since you don't have to itemize, there are no threshold amounts, such as costs related to a percentage of your income, to meet. And you don't have to worry about your deduction being reduced because, in the IRS's eyes, you make too much money.

You will, however, have to fill out another Form 3903  to claim your moving expenses.  And you have to make sure your move passes a couple of other IRS tests.

Going the distance: Moves of less than 50 miles don’t qualify for the tax break.  That distance is connected to your previous home and your pre- and post-move jobs.

Basically, your new job must be at least 50 miles further from your old home than was your previous workplace. Here's a sample calculation:

That’s allowed, since the location of your new job is 55 miles farther from your previous home that was your prior workplace.

Basically, the IRS won’t subsidize your move if it’s one simply to make your commute just a few miles shorter .

Under this distance test, the Obamas are out of luck. The distance is essentially the same between the Obama house in suburban Chicago and the Senate, his old workplace, and the White House, his new workplace.

But I think they can afford to cover the costs themselves.

Other rules: The IRS also has rules on how long you must be employed and just what moving-related expenses are allowable.  For example, mileage can be deducted as you make the transition, but not the meals you eat on the road. Go figure.

More on writing off moving costs can be found  at this IRS page, as well as in this About.com: Tax Planning: U.S. piece and this SmartMoney article.

I also cover this topic in my book, The Truth About Paying Fewer Taxes. It’s available from online sellers now and will be in book stores shortly. But if you can wait just a tad longer, I’m going to be giving away some copies.

I’m working out “win my book” details now and will be posting the giveaway specifics on the ol’ blog soon.

Wouldn't the Obamas get the new deduction because the White House is a residence (so they're making the commute 701 miles shorter? Or is his Chicago home still considered his main residence?