By all accounts, Ruth and Bernard Madoff were inseparable. Married nearly 50 years, they worked in the same office and ended most days dining together, just the two of them, at a favorite New York City restaurant.

But in December, when Madoff admitted that his multibillion-dollar hedge fund was an elaborate Ponzi scheme, Ruth reportedly was as shocked as the rest of the world.

Could the long-time wife of a man who fooled so many be just as gullible? Maybe. Love does tend to skew a person's focus and the Madoffs apparently had a very good marriage.

Did she or didn't she know? The possible involvement and culpability of Mrs. Madoff is something for the judicial system to sort through. And you can be sure that investigators are doing just that.

Madoff is negotiating a possible plea deal, but if those talks break down, prosecutors could threaten to indict his wife as leverage.

"This is tender territory for prosecutors, because you never want to seem like you’re overreaching," says Sean O’Shea, a lawyer who was chief of the business and securities fraud unit of the United States attorney’s office in Brooklyn, told the newspaper. "But this is the scam of the century, so the prosecutors will leave no stone unturned. It’ll be hard for them if they have evidence against Mrs. Madoff to leave her on the sidelines. But they won’t threaten her in order to get him without very good proof."

Filing decisions: Most of us aren't affected by Madoff's scheme, but the couple's situation does offer us something to think about at tax time. 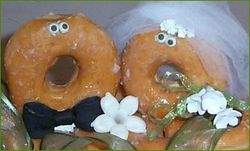 Should we file a joint return with our spouse, or file separately?

Most married couples do file joint returns. And they should. That filing status usually offers them the best tax result.

Many tax breaks are less lucrative, or even disallowed, when married people file separately. Splitting up the filing could cost you when it comes to credits for child and dependent care, as well as deductions for adoption expenses, education loan interest and IRA contributions.

You'll also make the IRS happier if you file jointly. Having only one return for two people helps speed of the tax return processors' jobs.

When apart is smart: These are, however, some situations when it pays to file separately.

When you both sign a joint return, you're both responsible for the amount of tax due on that 1040. It doesn't matter if only one of you earned the income, the IRS can come after both and/or either of you for its cash.

So if you see your spouse a little more clearly than Mrs. Madoff reportedly did hers, and you think he or she is getting some questionable income and not reporting it correctly to Uncle Sam, you might want to divorce yourself from the filing process if not the actual person.

You also should file a separate return if your spouse refuses to file a 1040, either jointly or separately. Just because he or she wants to tangle with the IRS doesn't mean you have to get into that a losing fight.

When apart pays: There also are less sinister reasons for filing separately. In fact, in some cases separate filings can produce tax savings.

Consider separate returns if one spouse has a lot of medical expenses and meet the 7.5 percent of adjusted gross income deduction threshold by filing alone.

Miscellaneous deductions also have a threshold, 2 percent in this case. Granted, it probably would take a lot of these types of write offs (just how many work-related professional trade journals can you subscribe to anyway?) to make separate filing worthwhile, but look at this area just in case. Here's a list of deductible miscellaneous expenses FYI.

If your husband or wife owes child support, a joint return could make you just as liable for any overdue payments. Protect your bank account, and any possible refund that could be reduced  by your spouse's oversight, by filing a separate 1040.

A few final filing thoughts: Remember, though, that if one spouse itemizes on his or her separate return, the other spouse also must itemize. That could cost you if you should claim the standard deduction because you have no or very few itemized expenses.

If you live in a community property state like the hubby and I do, rules on filing separate returns also are a bit more complicated. State law then determines whether your income, for tax purposes, can be considered as separate or community.

Also, gay couples who are legally married in their states -- right now that's Massachusetts, Connecticut and some folks in California before Prop. 8 passed -- still have to file their federal tax returns as single taxpayers (or head of household if they have any dependents). Federal law only allows a married man and woman to file as a couple, either jointly or separately.

Finally, keep in mind that by filing separately you could lose some tax breaks so you'll want to run the numbers both ways to see which filing option pays off more. Tax software will definitely help here.

And if you have a lot of complicated financial issues in your marriage, you probably should see a tax and/or financial planner to help you come up with a solid money and tax management plan.