The stimulus plan approved by the House Ways and Means Committee last week gets a C+ grade from one tax policy group.

While that's probably not a grade you would want to take home to your parents, another group is a bit more forgiving, at least by comparison. It says the House Democrats' stimulus package is better than what Republicans offered.

A so-so grade: The middling grade comes from the Tax Policy Center (TPC). Actually, that's my averaging of the 10 separate grades the nonpartisan group gave different sections of the proposal.

The TPC, a joint project of the Urban Institute and the Brookings Institution, based its individual provision grades on how well each would boost the economy in the short run.

Two provisions -- the "Making Work Pay" tax credit and an increase of the refundable portion of the child tax credit -- each got a B+, the highest grade the organization handed out. Five sections got a C or C+ and a D went to the part of the bill that creates incentives to hire unemployed veterans and "disconnected youth."

You can see all the grades and the reasons behind them in the TPC's Tax Stimulus Report Card.

The group notes that "our report card is preliminary and does not include all of the provisions in the bill…. We may evaluate additional provisions and adjust our grades and analysis as we learn more about the proposals. In addition, TPC will update its Report Card as the stimulus bill moves through Congress."

TPC's Howard Gleckman also comments on the grades on the group's TaxVox blog.

Another review: Meanwhile, Citizens for Tax Justice (CTJ) says that the tax cuts proposed by House Democrats "are far more targeted towards working class people than the tax cuts
proposed by their Republican counterparts."

Because of that, says CTJ analysts, the Democratic proposal is "more likely to be effective stimulus, since it would put money in the hands of people likely to spend it quickly, providing an immediate boost to demand for goods and services." 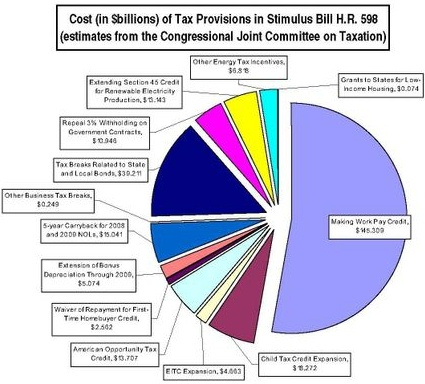 You can read the CTJ take on the House stimulus plan here.

Across the Hill: The focus so far is on the specifics of the Ways and Means bill, but the Senate Finance Committee also is working on its own stimulus proposal.

Over on that side of Capitol Hill, an additional $69 billion has been added to provide relief for more than 30 million households that could otherwise face the alternative minimum tax.

You can read more on the Senate proposals in this Bloomberg.com story.