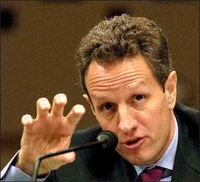 And again, his self-employment tax troubles drew fire from some members of the Senate Finance Committee, which is conducting the confirmation hearing. Geithner has admitted to making more than $40,000 worth of mistakes on his tax returns filed in connection with his employment by the International Monetary Fund.

Economy Watch, the Washington Post's blog following the economic crisis, reports there was a "20-question exchange that could best be described as restrained, but intense."

Geithner reiterated what he made a mistake, but that he thought he had fulfilled his tax obligation after conversations with the IRS.

Jon Kyl, R-Ariz., kept pushing for more, specifically wanting to know if Geithner came clean only as much as he needed to. Kyl also wondered whether Geithner's prior unpaid taxes from the same type of mistake would have remained hidden if not for the Obama Administration appointment.

Software in the middle: And today, TurboTax became collateral damage in the Geithner nomination process. The popular tax preparation software (a version of which I'm giving away courtesy of manufacturer Intuit) was caught in the questioning crossfire.

After saying that any mistakes made were his fault, Geithner acknowledged that he had used TurboTax. Charles Grassley, R-Iowa and the ranking Republican on the Finance Committee, asked Geithner if he recalled the software program telling him to pay the payroll taxes.

"Not to my recollection," said Geithner. "These were careless mistakes. They were avoidable mistakes. But they were unintentional. I take full responsibility."

"Each year, millions of Americans use TurboTax to accurately prepare and file their federal and state tax returns. The software helps taxpayers report their income and find the deductions and credits they’re entitled to claim.

"TurboTax, and all software and in-person tax preparation services, base their calculations on the information users provide when completing their returns. TurboTax also has built-in error-checking tools that routinely catch common taxpayer mistakes."

We'll probably never know the full details of Geithner's tax screw-up. Forty grand is a big amount, but for someone making as much as he did (does), it's likely just a drop in the bucket. Yes, rich people really can overlook such amounts.

So I'm not going to automatically ascribe nefarious motives to his tax filing error. Sometimes things really are just honest mistakes. I've made them, with and without software.

The bottom line is we all need to double check our filings, even when we use a computer program to help us through the tax code and form maze.

And always keep in mind the first rule -- well, my first rule anyway -- of computing: Garbage in, garbage out.

Why does someone who makes that much money do his own taxes? Doesn't he have better things to do with his time?

I would really like to know why he did not have to pay penalties on the money the IRS audit found that he owed the 1st time around. There seems to be more to this story.

Geithner sure gets more press time when everyone knows that he avoided his taxes until he had to pay them. Nothing really new or all that shocking.

My first rule of computing is: Is it plugged in?

The keywords in the TurboTax response:

He was an employee that received W2 but has to pay SE tax.