In recent days there has been much attention given to what some saw as a possible new fee connected to gaseous farm animals.

The bloated story began on July 30, when the Environmental Protection Agency submitted an advanced notice of proposed rulemaking, or ANPR, to the Federal Register in response to a 2007 Supreme Court ruling that called for tighter restrictions on greenhouse gases and other pollutants. Cows were mentioned as part of those other pollutants.

"In almost every instance this work has raised further questions of such importance that the scope of the task has continued to expand," said EPA Administrator Stephen Johnson when the rulemaking notice was issued. "The ANPR reflects the complexity and magnitude of the question of whether and how greenhouse gases could be effectively controlled under the

Farmers raise stink about possible tax: Fast forward to the end of November. As the public comment deadline rolled around, the ANPR got renewed attention. 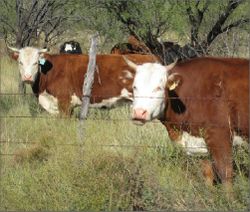 The American Farm Bureau's blog, FBlog, asked its members, Can You Afford the COW TAX?

"The Environmental Protection Agency (EPA) implementing that would regulate greenhouse gases under the Clean Air Act," wrote blogger. "EPA accepted comments on this proposed rule until 11/28/08. The proposed rule would include regulating agriculture, especially livestock."

The American Farm Bureau warned its members that the tax could reach $175 per cow, $87.50 per head of beef cattle and upward of $20 for each hog. "Farmers and ranchers do not profit $87.50 per cow or $20 per hog," continued FBlog. "This tax is not reasonable."

The word quickly spread. The New York Times' Green Inc. blog noted that farm officials from Texas to Alabama also sounded the alarm. Peter Gregg, a spokesman for the New York Farm Bureau told the newspaper that the response of farmers in his state "almost a panic."

Other farmers began to worry that the "toot tax" could be extended to chickens and other farm animals and cause more meat to be imported.

Tax worries are overblown: The EPA, however, says America's livestock owners can calm down.

EPA officials say the agency has not taken a position on any matter dealing with methane gas produced by livestock. The mentions "raising livestock" in its report on ways to regulate greenhouse gases under the provisions of the Clean

John Millett, a spokesman for EPA's air and radiation division, told the Associated Press that there has been an oversimplification of the EPA's document "to the point of distortion."

"EPA is not proposing any type of tax on livestock," Millett said.

'Fart Chart' ranking of U.S. cows: The EPA may have only briefly mentioned cattle flatulence in its clean air document, but ProCong.org has created the The Fart Chart.

The state-by-state look at dairy cow emissions was part of the nonprofit research and educational group's examination of milk issues .

ProCon.org says the cow emission levels were estimated by the United States Department of Agriculture and the Environmental Protection Agency using measurements taken in 2001, the most current year with complete data, from confined animal feeding operations. That sounds like fun academic research … not!

The top 10 states by cow population and emission levels are:

And the state with the stinkiest cows is

They don't tell you that in those "happy cow" TV commercials.

And I wonder if the cows meet the state's notoriously stringent emissions standards?

Photo of Big Bend cows taken by me during our 2006 visit to West Texas. The cattle did nothing offensive during the snapping of this picture. The javelinas, however, were a different story!