According CQ Politics, Senate Minority Leader Mitch McConnell (R-Ky.) criticized key parts of a draft bill that was circulated Monday, underlining the trouble supporters may have overcoming opposition in the upper chamber from GOP members.

The latest word is that Congress may be in for a weekend session to hammer out a final loan package to help the Big Three U.S. car makers survive.

NASCAR hopes that happens. The leading motorsports series in the United States says it could be in trouble if Ford, GM and Chrysler fail. The sport's powers that be already are cautioning that economic factors mean NASCAR's sponsorship revenue will grow at a slower rate next year, or even decline.

At a recent media summit in New York City, NASCAR's Chief Executive Brian France also said his sport needs the automakers to succeed not only because they are financially supportive, but also because their employees are big fans.

"We're not lobbyists," France said. "[But] we're going to be as expressive as we can to our [political] leaders to do the right thing." 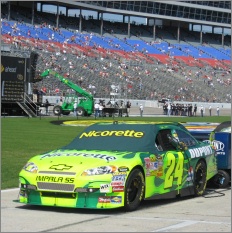 Top drivers ask fans to call Congress: To that end, NASCAR leaders in the garage are appealing to their fans. NASCAR's stars, including four-time series champ Jeff Gordon and three-time Cup winner Jimmie Johnson, have been urging their fans to contact their members of Congress to push through a Detroit bailout plan.

"We're optimistic that Congress will help support the automakers and help them get through this very difficult time," said Andrew Giangola, director of business communications for NASCAR.

Personally, I find this a bit ironic. NASCAR bills itself as a bastion of the American way, that is, individual success based on personal dedication and plain old hard work. I don't doubt that such an approach is one embodied by most drivers and team members.

Sharing the NASCAR wealth: But in recent years, NASCAR itself has evolved into a socialist system, with rules tweaked to ensure that the best, and presumably hardest working, teams don't necessarily earn their rightful places.

Take, for example, qualifying. I rant about this in my upcoming January Crazy Woman Driver (CWD) column, but here's a preview.

NASCAR guarantees 35 starting spots in each race to keep sponsors happy. That's fine and well from a business standpoint. If sponsors are unhappy, even those that can afford to put their company logo on a car will leave.

But that sometimes means teams that put a faster car on the track don't get the starting spot they actually earned. If we went by the All-American best-is-first basis, we wouldn't have this two-tiered qualifying system.

And now the sport is encouraging government help for its historic American car manufacturers. That flies in the face of capitalism. If a company can compete, it should reap its just rewards. If it can't, then it fails and what happens next is just the way it is.

Unless, like NASCAR, you want to guarantee that the makes and models you depend on don't fail. Then the guv'ment, whose agents the sport's founders ran from when hauling moonshine down South, is suddenly a friend to bail out private industry.

OK, we all face philosophical conflicts and dichotomies in our lives. But I just hope the next time NASCAR spouts a line of American-way dogma, someone (other than me) calls them on it.

Not stock anyway: Another NASCAR fan, Kevin Colby, points up another flaw in NASCAR touting the Chevys, Fords and Dodges that circle its tracks: The cars that NASCAR teams use are not stock showroom floor models that they used to drive from the '40s through the '70s. Today's cars are roll cages with sheet metal plopped on top and a revved-up motor shoved into it.

Kevin goes on to argue that the sport doesn't need the Big Three manufacturers because NASCAR already has plenty of sponsorship money. I'm not so sure about that. I think even the big guys -- Hendrick (Chevy), Roush (Ford), Penske (Dodge), Childress (Chevy) -- who get the lion's share of manufacturer support are running about on the edge of profitability.

That said, that means the sport is just too damn costly. And too big. Yes, I said it, NASCAR has gotten out of control. If 25 cars per race means that all 25 have full and sustaining sponsorships, then maybe that's what NASCAR needs to do. And think about how it will open up the races. But that's a topic for a future CWD column.

CWD's Christmas list for racing: OK, I've plugged a Crazy Woman Driver column that's coming out in 2009. How about this year?

You got it! Click here to go to the digital edition of Owner Operator magazine, where you'll find my December CWD column. This month I write Santa, asking him for special gifts not just for NASCAR, but several other racing series and drivers.

And yes, there is even a tax mention in one of the gift suggestions!

Photo of Jeff Gordon's 24 Chevy
in its pit road pole position before the start
of the 11/2/08 Texas Motor Speedway race taken by me!

What do you call 40 hillbillies continouusly turning left?

When it comes to motorsport marketing expenditures here's some free advice for GM, Ford, Dodge, and Toyota;

What do you call 40 hillbillies continouusly turning left?