A well-intentioned IRS agent…in a movie 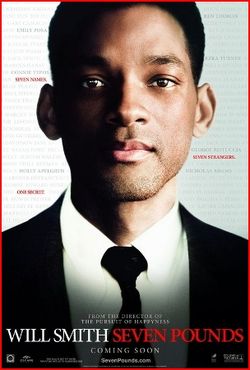 I love Will Smith movies, but I've been sort of ambivalent about his new flick, Seven Pounds

Maybe it's the name. It reminds me 21 Grams, a movie I enjoyed, but mainly for the great performances rather than the downbeat story.

And Seven Pound's promoters haven't done much to convince me to give the movie a chance. The TV ads are vague and mysterious. Apparently there's a twist and everyone's trying to keep the film's particulars under wraps so that potential audiences don't know the secret before buying tickets.

Then last night (or really early this morning), I was half watching At the Movies when Seven Pounds was reviewed. Now I don't put much faith in the show's two new guys (I prefer ReelTalk), but they did reveal a tidbit that piqued my interest.

A kind IRS agent: Will Smith's character is an IRS agent. He is described as using "his position of power to get close to people and learn more about them." Yeah, that could be someone in collections.

But unlike a typical (or stereotypical) hard-nosed revenue collector, the vague commercials say something about him helping the folks to whose personal info he is privy.

Now if an IRS agent as star of the show won't get people into theaters, nothing will.

Oh wait, an IRS agent as the lead role didn't put fannies in seats for showings of Will Farrell's Stranger Than Fiction. I guess I was one of the few who enjoyed that film.

Maybe Will will have better luck. One of the TV movie guys seemed to like it.

But then again, maybe not.

In Friday's New York Times, which I pulled out of my unread stack after seeing the TV review, A.O. Scott placed Seven Pounds "among the most transcendently, eye-poppingly, call-your-friend-ranting-in-the-middle-of-the-night-just-to-go-over-it-one-more-time crazily awful motion pictures ever made." Whoa!

Will's profession in the flick fared a tad better, though it's a case of Scott damning with faint praise. The NYT critic says, "An I.R.S. agent who wants only to help people. This is a nice, small joke that provides a few grace notes of levity in what is otherwise a lugubrious exercise in spiritual bushwa."

Upon further review, maybe Will should stick to action flicks.