Remember about a week ago when I promised you Don't Mess With Taxes' second annual Year-end Money Moves series and kicked it off with tax moves to make by Dec. 31? I haven't forgotten!

It's just that some other interesting timely blog items popped up. Then, just as I planned to start the series, I was in the Washington, D.C., area at the annual Taxpayer Advocacy Panel meeting and it pretty well sucked up all my time.

And once I got home, I was trying to catch up and get into the holiday swing of things on a personal level. 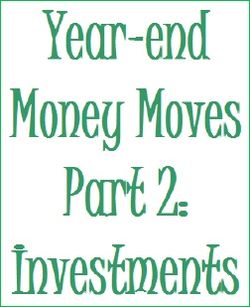 Yeah, I know, everyone has a sad story, and that was mine. But enough excuses! The Year-end Money Moves to Make series is back! And today we're looking at some investment actions you might want to consider by Dec. 31.

As mentioned when we started this series, you'll see that several of these investment moves also have tax considerations.

Rebalance and diversify
Any investor knows the importance of balance. Some folks obsess about their assets, checking values daily (or more) and are constantly trying to tweak their holdings. Others buy a stock or fund and don't pay any attention to it for years. Neither is wise.

And when an economy is bad, and the market even worse, things get more complicated.

It's a challenge to stick with the market when it's down, but if you've still got at least five years before you need to cash out your holdings, stick with it. Over the years equities have proved to be a good long-term investment. Diversifying your portfolio is a key way to handle market volatility, since different sectors perform well under different market conditions.

Sell losers to offset winners
For most folks, it's going to be much easier this year to find losers than winners. But if you were able to sell some stocks and make some money, now is a good time to make tax use of those holdings that didn't do so well. You can use the losses to offset the taxes on your investment gains.

Don't forget about any prior year losses that you carried forward. And keep in mind that you also can use these capital losses to offset up to $3,000 in ordinary income.

Factor in mutual fund distributions
When mutual fund year-end statements arrive in January, many fund owners are going to be in for a big, and bad, surprise. Although the value of the funds may have gone down in 2008, they might owe taxes on the holdings.

The reason? You're not in total control of your investments; your fund manager is. And with the market gyrations this year, fund managers have sold assets throughout the year, passing along a portion of any gain from those sales to you and your fellow shareholders as capital gains distributions.

There's not much you can do about those sales, but you can prepare for them. Give your broker or fund company a call and try to get an idea of what you might be facing. Then pay at least a portion of the expected tax bill by having your employer withhold a specific dollar amount from your last 2008 paycheck or two, or make up the difference with your final 2008 estimated tax payment in January.

You can read more about this investment tax predicament in this blog post from October, which also looks at one recommendation to ease this tax bite.

Pay attention to distributions
Speaking of mutual funds, if part of your portfolio rebalancing includes buying a fund or two, don't make the purchase until after the fund makes its year-end payout. If you buy just before the distribution date, as noted in this Kiplinger story, you'll end up with a tax bill on that new investment.

If, however, you want to sell a fund, experts suggest you do so before it makes its annual distribution. This date, known as the ex-dividend date, can be found on the fund's Web site.

Take advantage of zero capital gains rate
If you're in the 15 percent tax bracket, or can realistically get your taxable income level down to that point, you can save on any capital gains you might have. In 2008, and continuing through 2010, individuals at that earning level will enjoy a zero-percent rate on long-term capital gains instead of the current 5 percent rate.

The 15 percent bracket in 2008 tops out at $65,100 for joint filers, half that for single taxpayers. Remember, however, that all investment decisions should always be based on your overall financial situation and not just tax considerations. So if it's not a good time to sell an asset, don't do so just to save some tax dollars.

Keep an eye on the kiddie tax
Another issue that investors who are parents need to note is the "kiddie tax," which in 2008 applies to more young asset owners. This law was created to keep parents from shifting assets to their children in order to take advantage of the child's lower rates.

Good question. And the answer depends on what your financial situation is and what you want to do.

The hubby and I generally reinvest to help build our nest egg. The taxes we pay now on the reinvested dividends will count toward our basis when we ultimately cash out, so we won't be taxed twice on the earnings.

However, since we've had some big payouts and subsequent big tax bills, we've opted now to take one fund's dividends as cash as a way to help pay the taxes due on all our investments.

Is it good idea to take mutual fund capital gains in cash or keep reinvesting at today's (supposedly) bargain price?

The article was educative and offered considerable insight into the "demon" called taxes.