The man who helped popularize the "starve the beast" philosophy toward government has decided to try to work from within, at least temporarily.

Essentially, adherents to this fiscal-political strategy say that by reducing the amount of money coming into the government, that is, by dramatically cutting taxes to effectively create budget deficits, the "beast" of federal government will be forced to shrink via program cuts. Of course, that leads to the battle over just which programs and services to put on this tax starvation diet. Most who support this approach tend to target federal social programs, such as Social Security, Medicare, and the like. 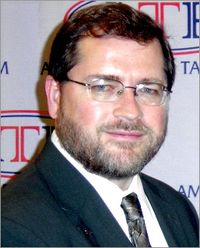 Grover Norquist, president of Americans for Tax Reform (ATR), is a vocal and vociferous supporter of government starvation.

And now he's decided the best way to control the federal menu is to be its head chef. So he's formally asked the Treasury Department to give him the $700 billion appropriated by Congress in the Emergency Economic Stimulus Act, aka the bailout bill money.

"I write today to formally request $700 billion from the TARP Capital Purchase Program. Since unionized auto companies, state and local governments, and certain credit card companies are applying, I thought I should, He also sent in the two-page application, which he notes he downloaded from Treasury's Web site. (Why do I suspect that the Treasury is now scrambling to make such downloading and submission of requests a bit more difficult?)

That's a snippet of ATR's request form pictured there to the right; click the image or here to see the complete document.

Norquist goes on in his cover letter to list the steps he would take, once he gets the bailout funds, to get the economy going again. They include:

And ever the political comedian, Norquist suggests to Treasury a way to recover the bailout money that has already been distributed:

"I am fully aware that some $125 billion has already been allocated as of October 29, 2008. However, given that the federal government has the full weight of the army, the FBI, etc. behind it, I am confident that you can re-appropriate this money from the likes of Wells Fargo (or their successor companies, if the current over-regulatory and over-taxing economic climate has caused them to go under)."

One good point: Attempts at dark humor aside, Norquist does make one point with which I agree. He wants Treasury to "ensure that there is full transparency in the TARP program by putting every TARP transaction and contract online for everyone to see," as well as disclose potential conflicts of interest with TARP-oversight staff.

Given the current Administration's penchant for secrecy and cronyism, that's a bold request from a fellow conservative Republican.

And I have to give Norquist credit for this latest grandstanding move.

Ever the showman -- he once quipped, "I don't want to abolish government. I simply want to reduce it to the size where I can drag it into the bathroom and drown it in the bathtub." -- Norquist certainly knows how to get his advocates and opponents alike to pay attention to (and publicize) his never-ending, and to my way of thinking ill-directed, tax-cutting efforts.

That guy is amazing. While perhaps ill-directed in the sense that he is idealistic enough to think the federal government will actually consider his request, at least Norquist didn't take a page from Wesley Snipes' book. That shows a sliver of sanity, doesn't it?