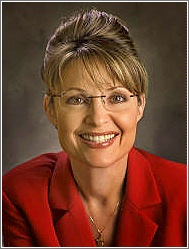 For the 2007 tax year, the Alaska governor and her husband, Todd, reported a tax bill of $24,738. The Associated Press notes, however, that the Palins might still owe Uncle Sam some money.

When the Palins filed for an extension in April, the amount of taxes they paid with that request a combination of withheld amounts and a $2,000 check came to $22,721.

But when they finally filed their return in early September, the Palins owed another $2,017.

When the AP asked if the Palins had paid any interest or penalties in connection with their shorting of Uncle Sam, and if so, how much, a McCain-Palin spokeswoman said the couple had paid "at least $2,017."

The campaign told the wire service it is researching if an additional payment had been made. (I'm sure that along with the AP, when the campaign has an answer, Katie Couric also will be notified.)

What's likely to happen is that, when the IRS gets around to processing the Palins' return, if it determines penalty and interest charges are due, it will send the couple a notice of the additional money due the U.S. Treasury.

About that per diem: Tax watchers also were quick to note that Palin did not report as 2007 income the $17,000 that she received in per diem payments from the state of Alaska. This was money she got from the state for days that she worked out of her home in Wasilla, rather than at her office in Juneau.

"Per diem" allowances received by an employee can legally be omitted from her gross income if they constitute reimbursements for amounts that the employee could have deducted as business expenses had the employee paid for them out-of-pocket and not been reimbursed. Thus, for Palin, the tax question would appear to boil down to whether, had she not been reimbursed for the $60,441 of travel, meals, and lodging expenses, she could have legitimately taken business deductions for them.

In connection with the per diem questions, TaxProf notes that Palin received an opinion letter. But TaxProf's Paul L. Caron says the conclusions in the letter seem problematic. Read his analysis here.

Other Alaska assets: In addition to her tax returns, Palin also released a financial disclosure report (and notes to the report), revealing that Alaska's first family has assets of more than

Rather than requiring specific amounts, the disclosure document shows asset values in broad ranges. Under those parameters, the Palins indicate that their Wasilla home is valued between $500,000 and

But the Palins' did bolster their mainstream America credentials by having tax preparation giant H&R Block take care of their returns in both 2006 and 2007. Depending upon the outcome of the election, do I see a future commercial?

Election year return roundup: With the release of the Palin documents, political personal tax transparency for this election year is complete. We now can peer into the tax windows of all the candidates and their spouses.

Below is a simplified breakdown of the candidates' returns.

As the table indicates, the richest of the group is Cindy McCain. She and GOP presidential nominee John file separate returns.

The beer heiress' 2006 return (the only document she made public) showed adjusted gross income (AGI) of almost Most of that amount, came from amounts reported on her Form 1040's line 17, i.e., "Rental real estate, royalties, partnerships, S corporations, trusts etc. Attach Schedule E." However, Mrs. McCain did not release her Schedule E information.

The next wealthiest are Michelle and Barack Obama. The bulk of the AGI reported on the couple's 2007 joint return came from the that Democratic presidential nominee netted for his biography. The couple's wage income last tax year was just under $261,000. They owed just under in taxes.

More on candidates' tax returns: Additional coverage and comment on Palin's filings can be found in the Minneapolis Star-Tribune, the Houston Chronicle and the Wall Street Journal.

Finally, you can see additional prior-year returns for the candidates, as well as the McCain Family Foundation filings and those of Bush, Cheney and past presidents at the Tax Analysts' Tax History Project look at presidential tax returns.

Why does she get per diem for working from home, federal employees don't! You save on the time & cost of commuting to work so you shouldn't further get rewarded by being paid to stay at home!