Getting shafted by arrow tax break?

As soon as the Senate passed the financial services bailout package last night, critics re-emphasized their complaints that taxpayers are getting shafted. And one of the provisions they've been pointing to is the repeal of the 39-cent excise tax on some wooden arrows.

Specifically, the tax break would apply to "Wooden Practice Arrows Used by Children," which are defined as arrows measuring 5/16 of an inch or less and unsuited for use with a bow with a peak draw weight of 30 pounds or more. The tax exemption is projected to cost over 10 years. 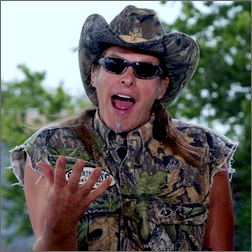 I'm sure all the kids who one day hope to hunt with rocker and bow enthusiast Ted Nugent are hoping the bailout bill is enacted. Ted probably does, too, since he no doubt uses some of those kiddie arrows at his own hunting camp for kids.

But the provision's biggest advocates are the owners of Rose City Archery in Myrtle Point, Oregon. That firm, according to Bloomberg, will save around about $200,000 a year from the tax break. The measure originally was proposed by Oregon Senators Ron Wyden, a Democrat, and Gordon Smith, a Republican.

The arrow provision, costing a relatively paltry part of the overall in added "sweetener" tax breaks for businesses and individual taxpayers, is catching it from all sides. In addition to the usual conservative suspects, Politico's Shenanigans lampoons the arrow tax break, as does the liberal Daily Kos.

I'll grant you that the provision seems silly and wasteful. And no argument here that it's a noteworthy example of special interest, pork barrel politics.

Arrow tax targeted in 2003: But this is not the first time that lawmakers have tweaked the tax code for arrow manufacturers.

In 2003, The Archery Excise Tax Simplification Act became law after lobbying by U.S. arrow manufacturers and the archery industry.

When enacted five years ago, the law imposed the same federal excise tax on foreign-made arrows as was being paid by domestic arrow manufacturers. Prior to that, foreign arrow manufacturers and importers escaped taxation on their products.

Of course, that 2003 law increased taxes, albeit not on U.S. businesses. But I'm betting that if folks were paying attention to tax bills back then, they probably got a chuckle out of that arrow tax.

As we've learned in this economic climate, although there might be some tax funny business on Capitol Hill, there's not much that's humorous about the country's finances nowadays.

It's just too bad it's taken such a national fiscal crisis to get people to pay closer attention to Congressional actions and demand more accountability. Let's hope that attitude continues once we're past this money mess, and that our lawmakers listen.

Hard choices: Would some of the tax breaks included in the bailout help you?  Are you willing to give them up?

Do you think Congress should always come up with money to offset all tax cuts from another source, such as tax hikes or spending cuts?

Do you want all tax legislation, whether it raises or lower taxes, to be considered separately instead of being rolled into other legislation as so often happens?

The fact that the government has been pushing this bailout instead of just guaranteeing the loans makes me very suspicious of the whole thing. In my opinion, we are seeing the finale death blows to the free market system.

Where did the excise tax on arrows come from? Is the repeal or exemption of the tax foolish, or was an "arrow tax" stupid to begin with? Think about it. This is not "special treatment" for an arrow maker. It's relief from being specially penalized with an excise tax because they make arrows.

Personally, I'm appalled by the entire bailout idea, since my personal political belief is that the government has no business bailing out private firms. Anybody that starts a business or participates in the business as a stakeholder of any sort assumes a certain amount of risk by doing so.

In particular, the little odds and ends of pork that have now been attached to an already overly bloated "economic stabilization" package are disturbing. Ultimately, the taxpayers of America still have to foot the bill for this. As a tax professional working in the IRS collections representation side of things, I see every day how hard a tax bill is on American families and businesses. Tacking an extra $10,000 to $12,000 per person to the federal isn't going to help.

To quote a political pundit, "Of course, that's just my opinion, I could be wrong."