Three guesses as to which group of taxpayers cheat on their taxes more and the first two don't count. Yep, the wealthy are more adept than the rest of us at hiding their income from the IRS.

That's the considered opinion of Joel Slemrod, economics professor and director of the Office of Tax Policy Research at Ross School of Business, University of Michigan, and IRS researcher Andrew Johns.

Tax gap numbers crunched: Slemrod and Johns used unpublished data from special research audits the IRS conducted on a sample of 45,000 individual returns filed for 2001. It was the IRS' first such research effort since 1988, and it led to the widely quoted tax gap amount of $345 billion.

The bottom line is that in 2001, taxpayers whose "true" annual income, defined as reported income adjusted for the tax gap underreporting estimated by the IRS, was between $500,000 and understated their adjusted gross incomes by 21 percent.

In all, according to Slemrod and Johns, because of their higher noncompliance rates, those with true incomes of $200,000 or more received 25 percent of all income, but accounted for 40 percent of net underreported income and 42 percent of underreported tax in 2001.

Portfolio.com created the graphic below indicating the percentages of tax cheats by income levels. 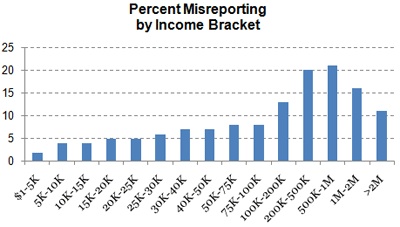 Easier to hide: Slemrod told Forbes that part of the reason the rich cheat more is that they tend to get more of their income from sources that are easier to hide.

This includes sources such as self-employment earnings; income from rents, partnerships and S corporations; and capital gains.

I'll toss in my two cents here, too. Rich folks also can afford to hire folks who come up with "creative" ways to keep cash out of Uncle Sam's hands.

I also agree with the magazine's assessment that Slemrod's and Johns' research "seems sure to add fuel to the election season debate over whether Americans earning $250,000 or more should pay higher tax rates, as Sen. Barack Obama, the Democratic presidential nominee, has proposed."

A look at the richest tax cheats: MSN Money has put together a slide show of the wealthiest tax cheats. And yes, our old buddy Leona Helmsley made the list.

Yes, some rich may cheat, because they have the money. But probably, if they have to pay only 15% of taxes, they all will pay.

They can use every loophole.

I wonder if the referenced study looked at EITC fraud?

There's a HUGE difference between inaccuracy and cheating. After running a small business, I totally understand how you could make mistakes. Doesn't mean you're cheating.