OK. I've been smacked down by the Fed chief. 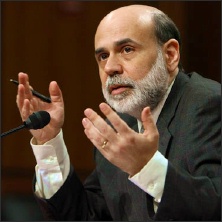 Testifying before the House Budget Committee this morning, Ben Bernanke said a second economic stimulus package might be warranted.

So much for my plea of say it ain't so, not to mention my apparently premature so long to a second rebate.

What kind of stimulus? Despite persistent efforts by Budget panel members, the Federal Reserve chairman refused to be pinned down on exactly what should go into any possible legislation that might provide another round of tax rebates.

Rather, Bernanke emphasized that any rebate should be timely, targeted and temporary.

Neither would Bernanke let himself be used as a pawn to advocate specific tax policy.

Several Representatives brought up the coming expiration of Dubya's tax cuts and tried to get the Fed chair to endorse continuation of them beyond 2010.

Bernanke didn't bite, deflecting one such round of questioning by responding that overall improvements are needed in our tax system. I'm relieved to know that while Bernanke disagrees with me about rebate redux, he and I share the general belief that our taxing mechanism could use a tune-up.

My highlights above of Bernanke's testimony were gathered between bites of breakfast cereal and getting the hubby off on a business trip. You can read more detailed accounts on the hearing at:

Stop talking! For what it's worth, when Bernanke began speaking to Representatives, the Dow was up by more than 200 points. By the time he finished it was up just 130 points.

Maybe it's just a coincidence, but it seems that whenever any financial or political figure makes a public statement, Wall Street gets the jitters.

Deficits here to stay: One of the arguments, made by me and many others, against a second stimulus package is how much it will add to our federal deficit.

A story in today's New York Times suggests that those concerned about America's official debt just need to get over it. Deficits, says the paper, are here to stay for a while.

In addition to the financial services bailout, we falling tax revenue, increased war costs and growing federal outlays, such as unemployment benefits and food stamps, going to help folks struggling the most in this nose-diving economy.

"But the extra spending, a sore point in normal times, has been widely accepted on both sides of the political aisle as necessary to salvage the banking system and avert another Great Depression," write Louis Uchitelle and Robert Pear.

"Confronted with a hugely expensive economic crisis, Democratic and Republican lawmakers alike have elected to pay the bill mainly by borrowing money rather than cutting spending or raising taxes. But while the borrowing is relatively inexpensive for the government in a weak economy, the cost will become a bigger burden as growth returns and interest rates rise."

So, it seems, what are a few more rebate drops in the deficit bucket?

Now we wait to see whether Bernanke's remarks will re-energize the Democratic leadership enough to call a lame-duck session to discuss more rebates.

Many Republicans would probably go along with a tax cut of some sort and extended unemployment benefits, provisions of the Democratic proposal that's been floated.

But expect the GOP to continue to fight added spending on public works projects and short-term federal aid to states.