Again with the arrow tax

The bailout bill is now law. Dubya signed the Emergency Economic Stabilization Act of 2008 just hours after the measure cleared the House.

No big signing ceremony for this controversial bill. The prez just affixed his name when the bill was dropped on his Oval Office desk. He did, however, visit the Treasury Department, where he thanked employees for their work on the package.

Washington, D.C., has cleared out now. And I'm about to call it a day, too. In the next few days, I'll be blogging on exactly what's in the bill for individual taxpayers.

But before we put this crazy bailout week to bed, I have to let the makers of children's arrows have their say. The manufacturers of the smaller ammunition say that although they've been the target of jokes and disdain, the bill's real beneficiaries are the youth groups that offer archery lessons. 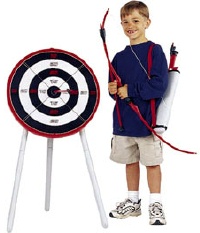 "Rose City Archery does not make one penny on this,"Jerry Dishion, president of the company, told the Associated Press. The company is based in Myrtle Point, Ore., and the state's two senators were responsible for getting the arrow tax exemption into the bill.

Rather, says Dishion, it's the kids who will reap the rewards of less costly arrows. Many youth programs, said Dishion, quit offering archery because the sport's supplies were too expensive, partially because of the tax.

Hey! I blogged here about how happy those bow-bearing kids would be! And hey! I'm sure Rose City Archery and its competitors will all reduce the price of their products now. Production savings are always passed on to the customer, right?

You can read the full AP story here, as well as in this New York Times story.

My adverse archery experience: When I was in elementary school, we had archery instruction one year. It was part of phys ed. Do they still require that in today's classrooms?

Maybe the gym teacher thought it would be fun. And I remember some kids making the expected Robin Hood references.

But I also recall thinking, even at that young age, that it might not be such a good idea to give a bunch of 8-year-olds potentially lethal weapons. Yeah, I was a bit of a cautious child.

I am happy to report that no one was injured.

I am even happier to report that we only tried that experiment once. I didn't like archery very much, but that was probably because all my shots landed well short of the targets!

The one part of the bill I *DO* understand is the mental health parity. Will insurance rates go up? Perhaps. Will lives be improved? You bet! Will police, court, jail and prison costs go down? Yes!
It's about time isurers quit trying to draw an artificial dotted line on the anatomy between so-called physical and mental health.