A tax attorney's take on Dracula

Yes, it's an old joke about blood-sucking IRS agents. So maybe that's why it seems so fitting that a tax lawyer has just published "The New Annotated Dracula."

Leslie S. Klinger is a Los Angeles tax attorney with clients in the entertainment industry. You can insert your own Hollywood blood-letting wise cracks here.

After his office closes, however, Klinger turns his attention to genre literature. The Wall Street Journal reports that Klinger's closer look at Bram Stoker's famous vampire novel is the tax lawyer's second such annotation. He previously edited the three volume, 2,700-page "The New Annotated Sherlock Holmes." 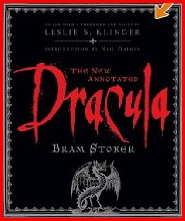 The Dracula effort is decidedly smaller, "only" 613 pages.

But, says John J. Miller's review in the WSJ, Klinger "nevertheless manages to enliven the experience of reading about the world's most famous undead white male. Like a movie studio that adds 'bonus features' to a DVD, [publisher W.W.] Norton includes extensive commentaries … and even offers what appears to be a genuine literary discovery: The volume describes a previously unknown 'alternate ending' to the 1897 text."

You can read Miller's article on the new Dracula book here.

Other notable vampire volumes: Halloween is a great time to sink your teeth into some good vamp lit. Here are some titles to get your blood flowing:

These are just my three favorites. There are thousands of other books, not to mention numerous movies (remember the Blade series' tax connection thanks to star Wesley Snipes' run in with the IRS, most recently blogged here) and television shows, underscoring our fascination with the fanged ones.

Austin's bats: Dracula, or rather one of his legendary alter egos, might feel right at home here in Austin. The city's Congress Avenue Bridge is home to world's largest urban bat colony. 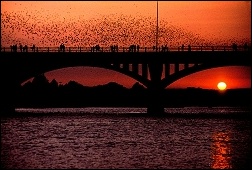 The great thing about these winged mammals is that the only blood they seek is from bugs.  This fabulous photo, courtesy of Bat Conservation International, shows them emerging at sunset in search of annoying insects.

Java Judi's post of Spooky Ideas has some more information on Austin's bats. Be sure to check out her photo of the "Nightwing" sculpture that lets folks know they're near our bats' home.