Honestly, I'm not trying to pick on John McCain, not that he cares. He's got lots of other things to worry about right now <cough … fire that Veep vetter … cough>.

But his multiple houses (that I blogged about last week), offer a good lesson for the rest of us property owners. This time, class, the topic is real estate taxes. 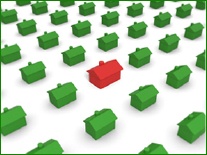 We might not all own eight -- yes, eight,  according to the Los Angeles Times -- pieces of property like the McCains, but even if we own just one, we pay property taxes on it.

The only good thing about those real estate taxes (aside from paying for some local services and, here in Texas, schools; now whether it's money well spent is another matter), is that those thousands we shell out can be deducted from our federal income taxes.

And even better for folks like John and Cindy McCain, the property taxes on each house are deductible, too.

OK, in the McCain case, some of that real estate is for investment purposes, which provides its own brand of tax breaks. But if the GOP presidential candidate and his wife owned all those houses for purely personal use, they still could deduct the property taxes on every single one.

No limits: This comes as a surprise to many folks, who are used to the tax provision that limits the deduction of mortgage loan interest to just two personal-use homes. But there's no such restriction on property taxes.

When you itemize, you can deduct taxes on all the real estate that you own for personal or family purposes on Line 6 of your Schedule A. (A new, much more limited property tax deduction is available for folks who don't itemize.)

Some limits: You just have to make sure that you are deducting taxes only. Some local property tax bills include charges for services the jurisdiction performs, such as picking up your trash. Other times you might get assessments for projects that should increase the value of your property, such as putting in sidewalks or sewers.

Those types of charges aren't taxes and aren't deductible. But often, local jurisdictions don't itemize, so people tend to deduct their full property tax bill. That's why Congress has been making some noise about requiring counties and other taxing offices to spell out these changes and send a copy of your tax bill to the IRS just like is done with your W-2 and 1099 forms.

This third-party reporting proposal for property taxes hasn't gone anywhere yet, but with a huge budget deficit, it might eventually get more attention.

For now, just be aware of the limit and be a good American and deduct only what you're supposed to. The IRS and I know you will!

The McCain housing portfolio: Just in case you don't have time to read the L.A. Times article right now and note all the McCain properties, they are:

According to the newspaper, all of the properties are held in the name of Cindy McCain and her dependent children through partnerships, limited corporations and trusts.

And while there's been a lot of attention on the properties owned by Cindy McCain, real estate writer Marcie Geffner says in an Inman News column that we should also be looking at John McCain's thoughts on housing policy. Read what Geffner found out on that matter here.

I wish the Media would quit beating on the McCains legitimate portfolio and revisit Obama's crooked deal on Chi's South Side.

Obama's real estate fairy Rezko, who orchestrated Obama's next door free land grab and his sweetheart financing is now in jail. I wonder if Obama cut himself a deal on his own property Tax Rate?

Homeowners should be grateful; in most states property taxes are lower on owner-occ homes than on rental property.