Did the home sale tax exclusion
kill the economy?

Did the 1997 tax law change that allows home sellers to exclude hundreds of thousands of dollars from their taxable income contribute to today's economic crisis?

At the blog Cafe Hayek, economists have been examining the housing bubble and what role public policy might have had in the housing price increases and the subprime meltdown.

"Maybe it wasn't speculative mania," writes Russell Roberts. "Maybe much of it was due to changes in public policy."

A tax boon for home sellers: The specific policy change economic microscope is one of the most hallowed homeowner tax breaks.

For the last 12 years, homeowners have been able to avoid capital gains taxes on net home sale profits of $250,000 if they are single taxpayers and $500,000 if they sellers are married couples filing jointly. 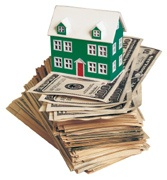 The beauty of the current law is that to get this tax break you don't have to buy another home within a specific time frame, as the home-sale tax law demanded of most pre-1997 sellers. You just have to live in the property as your primary home for two of the five years before selling.

When the bubble was inflating, folks made small fortunes buying homes, living there for a few years and then selling for a nice, nontaxable profit. It was a literal cottage (or ranch or colonial) industry.

The financial sector quickly joined home buyers, sellers and the housing industry in taking advantage of the once quite lucrative real estate market.

Now many folks are stuck with homes that are worth less than they paid, negating the benefit of the home sale exclusion.

And the lenders who helped any and everyone, regardless of qualifications, get into the housing game have helped bring the whole U.S. economy to the brink.

Some connected the dots: The contribution of the tax law to the housing bubble, says Roberts, has been largely overlooked.

"Do you think that had any effect on the price of housing? You bet it did. Vernon Smith [professor of law and economics at George Mason University and 2002 Nobel Laureate in economics] pointed out the impact in December 2007:

The joint housing and mortgage-market crisis once again reminds us that all financial implosions stem from the same cause: borrowing short and lending long without enough equity to weather periodic storms in the gap between.

But this bubble was different. Besides being fueled by housing purchases and repackaged loans, each with inadequate equity -- doubling down with other people's money -- at the end of the capital-gains rainbow was the right to take up to $500,000 of profit, tax free.

Cafe Hayek also cites BusinessWeek's Christopher Farrell 2005 article in which he said the housing boom at that time was built on disproportionate tax incentives that keep the stock market's rise in overdrive.

"As much as possible, the tax code shouldn't bias investment decisions," Farrell writes. "As it is, the tax code is too heavily weighted in favor of housing. The Urban Institute calculates that the government provides about $147 billion in subsidies to homeowners, including the mortgage-interest deduction and capital gains exemption."

The Tax Foundation's Tax Policy Blog, which gets a big hat tip for pointing us to Café Hayek, also has some thoughts on the economic implications of housing tax policy.

Breaking up tax breaks is hard to do: Of course, any time proposals to change homeowner tax breaks are offered, they are quickly scuttled. The most recent such instance was the President's Advisory Panel on Federal Tax Reform. Its suggestions were quickly shelved.

Have you sold a home and taken tax advantage of the home-sale exclusion? The hubby and I have done so a couple of times.

And I must admit that the tax law worked quite nicely for us when we sold our Florida home in early 2005 just before that region's housing market crashed.

Would you support a change in the tax law to even out the taxes on all capital assets? Of do you think that homeowners should get special tax considerations (detailed here), for costs they incur while living in their properties as well as when they sell?

Your house is not just an investment. It is a place to live. You got a service/product in return for your investment, and it was (usually) financed with tax-advantaged money.

Also, capital gains taxes are set lower than income taxes to account for inflation -- even though inflation has been astonishingly low over the years. If you want to index the profit for inflation, despite the additional benefits you received from the investment by having a place to live, then the gains should be taxed as income, including an assessment for Medicare and Social Security.
The burden of taxation shifted too far toward wage earners and general consumers when these housing handouts began. If you buy a typical item, you have to pay for it out of taxable income, then usually pay a sales tax on top of that, and the depreciation of the product does not earn you a tax break.
The belief that a homeowner deserves special protection from inflation and taxes is elitist. We have enough sense of entitlement in this country.

The old law, Section 1034, was more fair. If you moved to a higher-priced house, the tax was deferred. If you cashed out, you paid the tax. Yes, Section 121 should be repealed and Section 1034 restored.

If Section 121 remains in place, with its once-generous $500k cap never being indexed to inflation, let alone housing prices, eventually everybody who owns a home for a decade or more is going to owe capital gains tax. This even though most of the supposed capital gains merely reflect depreciation of the dollar. Inflation plus an unindexed capital gains tax means confiscation from long-term holders of assets.

On paper the bank losses are real. But in reality the losses are minimal. Let's look at an example in the simplest case. In the morning a bank has $1 billion in assets and $900 million in liabilities. They are in fine shape with $100 million in equity. Suppose that same bank has all of their assets a $1 billion CDO. With mark to market rules they must mark that $1 billion CDO down to whatever the market value is - unfortunately no one is buy CDO's so the value is far less than the true value - by the afternoon lets say the market value is $750 million. Now the bank is in trouble. They have $750 million in assets but $900 million in liabilities. They are technically insolvent. In the time span of a single day they went from solvent to insolvent. The FDIC will take them over and they're out of business. Sound familiar. But wait. Let's go back to the CDO. Let's say that 5% of the houses in that CDO are in foreclosure. That would represent only $50 million of the $1 billion CDO. Of the houses in foreclosure the bank will recoup at least 50% of their investment so they should lose only $25 million or 2.5% of the value of the CDO - not 25% as the market to market rule suggests. If the foreclosure rate is 10% then perhaps worst case they'll have to mark the value of the CDO down 5%. Do you see the point? With mark to market rules we are causing the banks and financial institutions to appear insolvent when truly the underlying assets will retain most of their value. Just because no one will buy a CDO right now doesn't mean the CDO is worthless. In fact, housing prices are declining because of mark to market. Mark to market rules are forcing financial institutions to mark down their assets and then sell them to raise capital But no one is buying the CDOs and so the price continues to sprial downward. Financial institutions aren't buying the discounted CDOs because they have their own requirements to raise capital on the CDOs they own which are being devalued. As the CDO from one institution is devalued all the others must follow suit. Because the CDO is devalued the underlying asset is being devalued by association. It is a vicious cycle. Changing the accounting rules from mark to market to a more sensible discounted cash flow model would solve many problems. It would more accurately reflect the value of the underlying asset, it would stop the downward spiral problem and it would add liquidity to the credit market because financial institutions would no longer be required to sell distressed assets at hugely discounted prices to raise required capital.

I really like this area of discussion. I might be inclined to allow for taxes on home sales if and only if one of two things happened.

1) The government stopped inflating the money supply causing money to be worth less and reducing our spending power.

2) The government stopped taxing us on any gains in investments that were lower than inflation. If my house goes from 200,000 to 400,000 in 12 years that's about a 6% annualized gain. If inflation over that time is 3% a year, I should only pay taxes on 3% a year for that full time, not 6. Otherwise the government can create more money both by inflating the money supply and then by taxing me on my "gain" on investments on which only half is a true gain. So, in California under that law, I'd probably give back 40%+ back to the federal and state and have given almost all my gain away, which would hardly be fair.