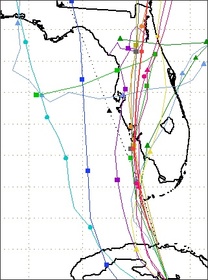 I am so bummed! My most favorite place in all of Florida looks like it's the bullseye for Fay.

My best hope is that if the track there to the left holds, Fay's still "just" a tropical storm and not a full-fledged hurricane when she makes landfall at Sanibel Island.

That lovely retreat on Florida's Gulf Coast took a pounding from Hurricane Charley at about this time back in 2004. It took years for it to recover.

The good thing is that most of the island is the Ding Darling National Wildlife Refuge, and nature is much quicker to rebound than we humans.

But I just hate seeing the place hit yet again. So please join me in keeping fingers tightly crossed that Fay doesn't do too much damage, to Sanibel or anywhere else.

Disaster prep time: I'm also hoping that Floridians have finally overcome their hurricane nonchalance. The New York Times had story just this past Friday noting that, "Florida's faltering economy and a recent scarcity of major storms have led to what emergency management officials now describe as a dangerous level of complacency."

Having lived in Florida for six years and gone through two hurricanes and several tropical storms during that time, I know that grocery and hardware stores in Fay's projected path are cleaned out by now, but for folks who might still face a 'cane this year, I refer you to my June 1 post, Time to make disaster preparations.

That advice is not just for coastal residents. All types of disasters occur all the time, in every place. So give it a read and get your home and finances in shape so that you can come through any event as unscathed as possible.

Tax help, too: For you folks facing Fay, remember that if you do suffer storm damage, tax help is available via the casualty claim on your tax return.

And, not that anyone wants this to happen, but if your neighborhood ends up in a presidentially declared disaster area, you have tax filing or return amending options that could get you some additional money from Uncle Sam sooner rather than later. Details in this previous blog post.