The Democrats are having a field day at their Convention this week with Sen. John McCain's seven houses.

But beyond the political punches that aren't being pulled, McCain's confusion about his personal real estate could be part of a bigger problem.

Sure, most of those properties probably belong to his wife Cindy, and we already know that she prefers keeping her money (or at least her taxes) separate from John's finances. That's fine. A lot of married couples operate on the same principle.

And the McCains no doubt have people to take care of their separate accounts. Again, not a problem. Lots of folks, even those with just one house, have financial and tax advisers.

But the gaffe by the presumptive GOP presidential candidate seems to indicate that he has no idea what's going on with his own money. He already told us that the economy wasn't his strong point politically. However, I (and maybe you, too) assumed that he probably was better schooled in the micro-economics of personal finance.

Apparently not. And that's not good. When anyone -- rich, poor, politician, department store cashier, multi-property owner or renter -- doesn't have a handle on his or her finances, bad things can happen.

For John McCain, the bad thing right now is being pummeled by Democrats and some political pundits. 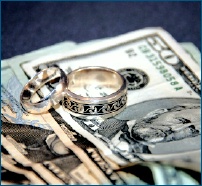 And as a husband, McCain needs to be more aware of his family's finances.

Even though Cindy apparently does her best to keep her personal millions separated (including one of those pieces of real estate in question), when you're married it's damn near impossible to keep impenetrable walls, financial or otherwise, in place.

Sharing with your better half: It looks like the McCains violated the first rule of couple money management: Talk about your finances.

Even if you keep, for the most part, separate accounts, you still should know some basics about your spouse's finances. In the worst-case scenario, your spouse dies, leaving you with no knowledge of his or her accounts and at the mercy of outside financial advisers with whom you might not be familiar or comfortable.

So John and Cindy, I know things are a bit hectic right now, what with the Republican Convention coming up and that nagging VP decision still hanging out there, but make some time to talk about your money, OK?

While your personal accounts are really not the business of us voters, some of us are a bit disconcerted when it looks like you can't take care of your own financial house … or houses.

How then will you handle all our money, too, if you become the prez?

Money tips for couples: You don't have to be married to have money issues. Couples that don't have an actual wedding ceremony, but who have committed to sharing their lives, also need to make sure they discuss how they will share their dollars.

A few weeks ago, SmartMoney looked at The Six Financial Mistakes Couples Make. They include:

I also wrote about couples and cash in His, Hers and Theirs for austinwoman magazine. That was my first column for the magazine back in 2006, but the advice still stands.

In that article, I outlined some of the bank account options available to couples. They are:

Joint account shared by both partners
What's good about it? It's simple. It's less time consuming to manage. And each partner can see exactly what the other is spending money on. Depending on your point of view, this last point also could be a negative.
What's bad about it? Different financial styles might pose management and accounting problems. Depending on how it's set up, one person could empty the account without the other's consent or knowledge. And the entire account could be at risk even if only one partner has a legal or credit issue.

Separate account for each partner
What's good about it? Each maintains an independent financial identity. If one person is a bad money manager, the other's finances are not at risk.
What's bad about it? Bill paying is more complicated. It requires more work when planning to spend on or save for a shared project.

Hybrid, with a shared household account and separate partner accounts
What's good about it? Each person maintains an independent financial identity. A shared expense payment system generally is easier to track and manage.
What's bad about it? Record keeping of separate contributions to the joint account requires attention. Partners must agree on which one of them will manage the joint account.

Which one you and your partner choose is entirely up to you. But the key is to discuss your finances, now and often.