Did you hear about the ABC News producer who was arrested in Denver this week while trying to take pictures of Democratic Senators and VIP donors leaving a private meeting at The Brown Palace Hotel?

As a former newspaper reporter, my immediate inclination is to side with Asa Eslocker, who works with ABC News' investigative unit.

According to Charlie Gibson's blog The World Newser, the network has video showing Eslocker standing on a public sidewalk, so the charge of trespassing seems, uh, bogus! 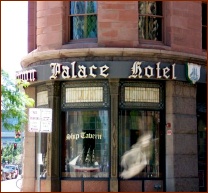 And not that I'm casting any aspersions or trying to start rumors, but this overzealous attempt to avoid any video record of who's doing what with whom and why at The Brown Palace brought to mind activities associated with the historic hotel's early days.

Legend has it that a tunnel connected The Brown Palace with the Navarre building across the street. Persistent rumors insisted that gentlemen staying at the hotel traveled discreetly by rail car through the tunnel to the Navarre, at the time a house of gambling and prostitution. It has never been proven that a tunnel existed, but subterranean tracks leading to a brick wall have been located beneath the Navarre.

A business or tax expense? What really sparked my interest was this incident's financial connection.

Eslocker posted his $500 bail by swiping his corporate credit card.

Jeremy Simon over at CreditCards.com's blog Taking Charge says the use of the plastic was perfectly proper. Eslocker was doing, or trying to do, his job. So the get out of jail not-quite-free charge is a legitimate business expense.

I've worked for some big companies that issued us employees corporate cards. They definitely came in handy. Sometimes, though, the accounting offices quibbled over certain expenses.

So if ABC money folk have a problem with the charge, let me suggest that Eslocker hang onto everything documenting that $500 expenditure and consider claiming it as an unreimbursed business expense on his next tax return.

While posting bail might not be an ordinary expense, in this case it definitely was necessary!

I like your suggestion about his taxes. Hopefully, it doesn't come to that, though.

Cardholders who find themselves in trouble with the law will be glad to know that certain card issuers may even offer reward points for posting bail: