With the Democratic Party Convention kicking off tomorrow and the Republican Party event on its heels, the IRS thought it a good time to remind religious groups what is and isn't acceptable as far as tax-exempts group and political activities.

OK, maybe it wasn't an act of the tax gods, but merely a coincidence. Still, what with the recent Saddleback Show, it's a good idea to make it clear -- again -- that the IRS still has some degrees of separation of church and state when it comes to collecting revenue. Blur those lines, and the agency will want some money.

Here's what IRS Publication 1828, Tax Guide for Churches and Religious Organizations, has to say in its preface:

Congress has enacted special tax laws applicable to churches, religious organizations, and ministers in recognition of their unique status in American society and of their rights guaranteed by the First Amendment of the Constitution of the United States. Churches and religious organizations are generally exempt from income tax and receive other favorable treatment under the tax 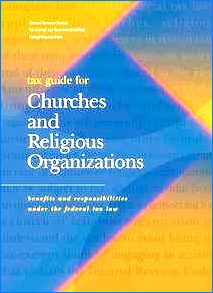 law; however, certain income of a church or religious organization subject such as an unrelated business.

The IRS offers this quick reference guide of federal tax law and procedures for churches organizations to help them voluntarily comply with tax rules. The contents of this publication reflect the IRS interpretation of tax laws enacted by Congress, Treasury regulations, and court decisions. The information given is not comprehensive, however, and does not cover every situation. Thus, it is not intended to replace the law or be the sole source of information. The resolution of any particular issue may depend on the specific facts and circumstances of a given taxpayer. In addition, this publication covers subjects on which a court may have made a decision more favorable to taxpayers than the interpretation by the IRS. Until these differing interpretations are resolved by higher court decisions, or in some other way, this publication will present the interpretation of the IRS.

The Guide has a 9-page section on political campaign activity that covers ministers speaking on their own behalf, issue advocacy, inviting candidates to speak at church events, voter education, voter registration and get-out-the-vote drives.

As far as religious groups' online efforts, the Guide says that if a 501(c)(3) organization posts material on its Web site that supports or opposes a candidate for public office, the IRS will treat that Internet posting the same as if the bricks-and-mortar church had handed out the materials or made the statements.

And be warned, says the IRS: A tax-exempt organization is responsible for the consequences of linking to another Web site even if the religious group has no control over the linked site's content.