Business taxes: too much, too little

Who's right? It depends upon who's compiling, or at least interpreting, the numbers.

"This report makes clear that too many corporations are using tax trickery to send their profits overseas and avoid paying their fair share in the United States," said Sen. Carl Levin (D-Mich.), one of the members of Congress who requested the GAO investigation.

His colleague, Sen. Byron Dorgan (D-N.D.) agreed: "It’s shameful that so many corporations make big profits and pay nothing to support our country. The tax system that allows this wholesale tax avoidance is an embarrassment and unfair to hardworking Americans who pay their fair share of taxes."

On the House side, Speaker Nancy Pelosi said the study "highlights the need to revisit tax reform to ensure that U.S. companies pay their fair share of taxes."

Not so fast: The Tax Foundation says that media coverage of the report overemphasized the tax liabilities (and payments or nonpayments, or big businesses.

Tax Foundation economist Josh Barro took particular issue not with the political posturing, but with an Associated Press story that Barro says overstated the number of large corporations not paying corporate taxes.

"The actual report reflects that, of the 1.26 million U.S. corporations with no 2005 tax liability, just 3,565 were large," says Barro. "That's 0.28 percent, which is 90 times less than the figure reported by the AP. Policymakers and the public should not be deceived by this story that misrepresents the GAO report."

Barro says the GAO report actually reveals that 75 percent of large corporations did pay corporate income tax in 2005. And in the vast majority (85 percent) of cases where they did not, it was because they had zero or negative net income for 2005. For instance, American Airlines and General Motors avoided income tax for 2005 by losing $862 million and $10.5 billion, respectively, in 2005.

"In fact, the GAO report shows that large, profitable corporations are paying taxes on their profits," says Barro.

Recrunching the numbers: The Tax Foundation has offered its own analysis, calling attention to what it says is a high U.S. corporate tax rate.

The U.S. overall corporate tax rate of 39.3 percent is the second highest among Organization for Economic Co-Operation and Development (OECD) member countries and harms the long-term prospects of the U.S. economy, according to the Tax Foundation report. 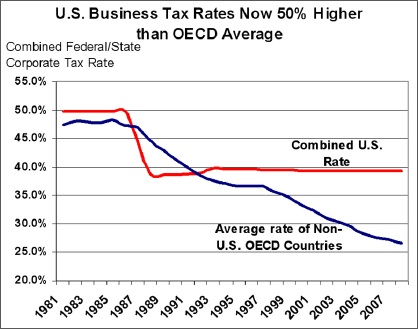 For a look at the comparison of U.S. and other countries' tax rates, check this table compiled by the Tax Foundation. You can read the group's full study here.

The Tax Foundation also has launched CompeteUSA, an effort, according to the Web site, "to raise the public's awareness of America's high business taxes and how those taxes are affecting our competitiveness, wages, and living standards."

Read more about it: For other blogging thoughts on corporate taxes and political and media reactions check out: