Leona's dog must live on less

Trouble has run into some bequest trouble.

The 9-year-old Maltese was left $12 million last year by her late owner Leona Helmsley, the "Queen of Mean," who once pronounced that "only the little people pay taxes" and then eventually served time herself in connection with unpaid taxes. 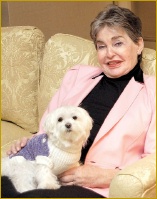 But this week a Manhattan judge decided that $10 million of Trouble's inheritance should go instead to charity and two of Helmsley's grandchildren.

According to the New York Post, Roth ruled Helmsley was mentally incompetent when she made out her will.

The judge then declared that $4 million should go to an undisclosed charity and $6 million to Craig and Meegan Panzirer, Leona's grandchildren who were expressly left out of her will "for reasons which are known to them."

Will agreement worked out: Roth gave Craig $4 million and Meegan $2 million on condition they do not discuss their dispute with their grandmother and they turn over any documents they have about her.

The Post reports that the grandchildren quietly worked out the deal with the Helmsley's estate executors a couple of months ago. In addition to the money the Panzirers will get, the deal calls for the estate to cover their legal fees.

And both amounts now directed to the Panzirers are tax-free, reports the Post. Don't get all worked up. That's not a special deal. There is no taxation of inheritances by either Uncle Sam (see #6 in this Tax Topic) or New York state.

Humans vs. pets: In addition to leaving Trouble all that money, when Helmsley died last August her will also directed that most of her $2.5 billion go to unnamed causes through a charitable trust.

But some human relatives also got nice bequests back then, such as a brother who received $10 million for taking care of Trouble, as well as four other grandchildren and 12 great grandchildren.

I didn't hear the evidence and I'm no estate attorney, but I am definitely curious as to what led the judge to decide that Leona was a tad off her rocker by giving Trouble so much money while leaving none to two of her grandkids.

From the document itself, it sounded like she knew exactly what she was doing, especially since she did give money to other human relatives.

And about those other bequests. If Leona was mentally incompetent, wouldn't that invalidate the other provisions of the will, which apparently were left in place?

I have relatives and I've had pets, and when it comes to preferences, the small, four-legged furry ones often ranked higher than the bipedal hominids when it came to apportioning my affections!

In addition to the New York Post article, you can read more about Trouble's inheritance troubles in the Baltimore Sun blog Mutts, AFP and the London Times.

I have a problem with this. If she deliberately excluded them from the will, why did a judge overrule her decision? Yeah, it's odd, but I'd hate to think that if I had assets I specifically didn't want certain people to receive, a judge could overrule my wishes. Granted, no dog needs 12 million dollars to live on but to give a chunk of the dog's estate to people who were specifically excluded in the will just reeks of impropriety. Why not throw the sum into the charitable trust instead? Why can't I get some of Leona's millions?