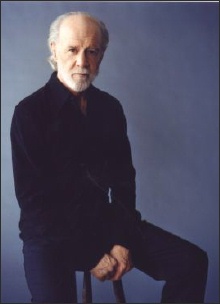 Carlin's publicist said the 71-year-old comic, who had a history of heart trouble, went into St. John's Medical Center in Santa Monica, Calif., on Sunday afternoon complaining of chest pain and died later that evening.

Just last week, Carlin was named as recipient of the 11th annual Mark Twain Prize for American Humor, a lifetime achievement award presented to an outstanding comedian. The presentation was to be televised this November.

NOTE: Links in two paragraph go to YouTube clips, parts of which some readers might find offensive.

Everyone has a favorite Carlin shtick, from his portrayal of Al Sleet, the hippy dippy weatherman, to his explanation of the nuances of American sports to our obsession with "stuff" to the burden of nice days.

But he is best known for challenging conventions and First Amendment limitations with his "Seven Words You Can't Say on Television" routine. A more cynical America and cable TV, especially its premium channels, have changed the rules somewhat, but the routine is still a classic.

Carlin was arrested for speaking the words in a live performance in Milwaukee in 1972. When they were played on a New York radio station, they resulted in a 1978 Supreme Court ruling that upheld the government's authority to sanction stations for broadcasting offensive language.

"So my name is a footnote in American legal history, which I'm perversely kind of proud of," he told The Associated Press earlier this year.

George's IRS issues: Carlin also had another legal matter that affected his career. It took him almost 20 years to pay off a federal tax debt.

But, said Carlin, his tax travails actually extended his career. In an interview with Larry Getlen for Esquire magazine in 2001, Carlin explained:

"Because of my abuse of drugs, I neglected my business affairs and had large arrears with the IRS, and that took me eighteen to twenty years to dig out of. I did it honorably, and I don't begrudge them. I don't hate paying taxes, and I'm not angry at anyone, because I was complicit in it. But I'll tell you what it did for me: It made me a way better comedian. Because I had to stay out on the road and I couldn't pursue that movie career, which would have gone nowhere, and I became a really good comic and a really good writer."

In that same article, he also opined, "There's nothing wrong with high taxes on high income."

Last December, Carlin also discussed his tax tribulations in Bankrate.com's Financial Literacy guide on taxes, noting that the lesson he learned is "Penalties and interest on back taxes make a mountain out of a mole hill."

But despite his eventual philosophical acceptance of his tax troubles, I'm willing to bet that when Carlin first discovered that the IRS was dunning him, he used, very loudly and emphatically, all seven of those forbidden words.

HIGH taxation of ANY income, great or small, is wrong. The public does not exist to fill the state's coffers or empower politicians to purchase votes at taxpayer expense. Government is inherently evil, but it is a necessary evil. It should therefore be kept on a short leash and only fed sparingly.