As IRS Commissioner Douglas H. Shulman was testifying before Congress last week (blogged here) about how his agency was dealing with the delivery of millions of economic stimulus payments, the Government Accountability Office chimed in with its findings on that issue.

The GAO report Tax Administration: Data on the Effects of the Economic Stimulus Program on the Internal Revenue Service's Telephone Service and Costs (GAO-08-916T) looks at exactly what the title says.

The report's summary notes that the hastily passed rebate measure "created [an] additional, unanticipated workload for IRS and required IRS to act quickly to deal with the public's questions and begin issuing payments."

The IRS called the demand for rebate-related telephone assistance "unprecedented." For the week ending May 24, the IRS reported call volume was almost six times greater than the same week last year.

The table below, compiled by the GAO with the IRS' help, illustrates the differences in the two filing seasons when it came to dealing with taxpayer calls. Click here for a larger version. 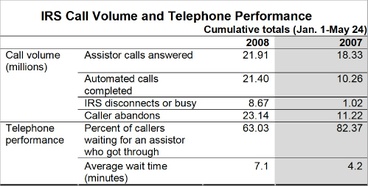 So it's no surprise that, despite reallocating IRS staff from collections work to answering stimulus-related calls, the percentage of taxpayers who got through to talk with a human declined markedly.

That's not good news for the IRS, which each year hears as one of the most-common taxpayer complaints that it is too difficult to get help via the service's hotlines.

But at least this filing season, the IRS had a reason why callers had to wait almost twice as long to talk to someone.

Then there's the money: The IRS' job is bringing in money. But administering the stimulus payments is likely to cost the agency, and the U.S. Treasury, much more than all our spending of the checks will recoup.

The IRS received a supplemental appropriation of $202 million to handle implementation of the economic stimulus legislation.

But the costs for implementing the economic stimulus legislation may be up to $862 million. The rebate tab started running back in March with $42 million spent to send out letters announcing that the rebates were coming.

And that nearly $900 million cost isn't counting what the IRS lost by taking hundreds of IRS staffers away from their collections duties and putting them on the phones to answer the avalanche of rebate calls. That move, estimates the IRS, will result in up to $565 million in forgone enforcement revenue.

Can you say economic stimulus boondoggle?