Tax-free Memorial Day shopping for some

Are you ready for some tax-free products?

For the last several years, around a dozen or more states have tried to entice consumers by offering the chance to buy certain products without paying the usual state and, in most cases, local sales taxes. These things have become so common, I half expect to see them start showing up on mass-market datebooks.

When that does happen, most of the tax holidays will be blocked off on fall weekends, giving retailers a chance to tie tax savings to back-to-school sales.

But Tennessee decided to offer a spring event back in April. Virginia and Louisiana are kicking off their summer seasons with tax-free holidays beginning this Memorial Day weekend.

Don't worry. The early tax-free shopping option in these four states doesn't replace their fall events. I'll get you the details on them and the other states with sales-tax holidays scheduled for later this year as those dates near.

But for this weekend (and beyond, in one case) here's the scoop on tax holidays.

The Lone Star State's early tax holiday supplements its regular back-to-school event in August. While the fall event offers tax savings primarily on clothing and footwear, this weekend is designed to save you tax dollars on energy efficient appliances.

Dubbed the 2008 Energy Star Sales Tax Holiday, it runs from 12:01 a.m. on Saturday, May 24, through 11:59 p.m. Memorial Day, Monday, May 26. During this time, Texas shoppers won't have to pay the state's 6.25 percent sales tax or associated local levies (which make the combined rate here in Austin 8.25 percent) on just about anything that bears an Energy Star sticker.

This Web page has details on all of Texas' tax-exempt products and special situations such as Internet and catalog sales, as well as lay-away purchases.

Louisiana
The Pelican State is still recovering from Hurricanes Katrina and Rita in 2005, so its officials are still a bit wary about what the upcoming storm season might bring. And to ensure that Louisianans are prepared, this Memorial Day weekend the state is waiving its sales tax on purchases of hurricane supplies.

On May 24 and May 25, hurricane preparedness items worth up to $1,500 each are tax free. Items that qualify include radios, generators, portable lights, cell phone batteries and chargers, food coolers and "storm shutter devices."

Having been through three hurricanes myself (yep, that's a big reason the hubby and I high-tailed it back home to a more inland Texas location), I can attest to the value of getting items to help you cope with a 'cane beforehand. So you bayou area shoppers, take advantage of this tax break.

You can check out this document for holiday details, as well as this special flyer.

And while this is Louisiana's first hurricane preparedness tax holiday, it won't be the state's last. The new law calls for the event to be held on the last Saturday and Sunday of each May.

I don't seem to recall Virginia suffering through a major hurricane in a while, but officials there don't want to take anything for granted. So the Old Dominion also is offering its shoppers a chance to stock up tax-free on hurricane and other emergency preparedness items.

In fact, Virginia shoppers have a week -- from Sunday, May 25, through Saturday, May 31 -- to pick up certain tax-exempt supplies, such as portable generators costing $1,000 or less and a wide range other eligible items priced at $60 or less.

This list of items has details. You also can check out the state's frequently asked questions about the Memorial Day event.

Florida shoppers left out, for now
I hear you, Sunshine State residents. But I have bad new about the hurricane preparedness tax-free holiday y'all have enjoyed for the last three years. 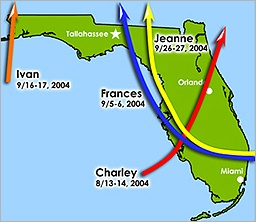 Florida officials decided that the early summer tax-free event, which it instituted in 2005 following the devastating 2004 hurricane season, was just too expensive.

Eliminating it will give the state an estimated $12 million to put toward its $3 billion budget shortfall.

Budget concerns also will affect Florida's fall back-to-school tax-free holiday. It will be shorter and books will no longer be on the tax-exempt list.

OK. You're a creative bunch. You can now make up your own jokes about books and the Florida school system.