Today is heaven for auto racing fans, at least those of us who enjoy watching drivers turn mostly left. 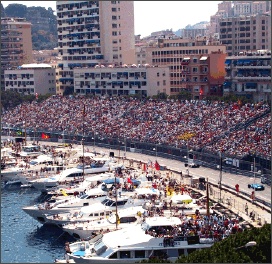 I'm sure Lewis Hamilton and his fellow Englishmen and women will be having the most fun tonight. Hamilton became the first Brit to win this most prestigious F1 race since Graham Hill in 1969.

Next up, was the Indianapolis 500, finally regaining legitimacy after the Tony George debacle (my rant on that situation in this month's Crazy Woman Driver column). It's America's own great racing spectacle, sans yachts, where the heartland's Gasoline Alley plays host to its own share of global drivers.

Congrats to Scott Dixon on his first Indy win. I'm sure my CWD editor, a New Zealander like Dixon, is quite pleased.

Then in a couple of hours, NASCAR offers its version of excess via the longest oval race, the Coca-Cola 600 at Lowe's Motor Speedway. The Charlotte, N.C., event begins in daylight and checkers don't fall until hours later under artificial lights.

So, as you can image, I'm not getting much accomplished today.

Gas and go: But I did want to share a couple of articles, both from the New York Times, that, fittingly, deal with fuel, and tax, issues.

In the paper's Economic View column, Robert H. Frank takes a look at Adam Smith's "Wealth of Nations" principles; i.e, how a business owner often "is led by an invisible hand to promote an end which was no part of his intention."

Frank says this concept has important implications for economic policy in general, and specifically for the recent political posturing regarding gasoline taxes.

"When market prices convey accurate signals of cost and value, the invisible hand promotes the common good," writes Franks. "But prices often diverge from cost and value and, in those cases, taxes can actually help steer resources toward more highly valued uses."

Then in Everybody's Business, Ben Stein also looks at the drama now playing out around gasoline and fuel prices.

Stein offers some suggestions on how we gas-happy American drivers can deal with the current fuel crisis. But one thing Stein says we shouldn't do is increase taxes on oil companies.

"First, we do not kill the geese — the big oil companies — that lay the golden eggs," writes Stein. "We encourage them and cheer them on to get more oil. They need incentives, not hammer blows."

Back on track: Now I'm going back to watching gas-guzzling races. Speed TV is replaying this morning's F1 race. It will wrap up just in time for the green flag to drop at Charlotte.

And actually, it's a form of research. Most of the wealthy F1 drivers live in Monte Carlo, drawn there by the principality's favorable tax laws.