The shared tax troubles of rich athletes and telecommuters

OK, I know it's hard to muster much sympathy for rich athletes. But I also know I'd like to have some of the money "troubles" they have.

However, over at PGATour.com, columnist John Maginnes says I should be careful about what I wish for, especially at tax time.

"Have you ever wondered if rich people hate taxes, too? I got to be almost rich for a year or two and hated them even more," writes Maginnes.

The main problem is the jock tax, which I've blogged about before (here). Here's Maginnes' take on it:

In short, a player has to file a tax return in every state where he tees it up. If you got paid $1,200 to play the Monday pro-am in Milwaukee last year and then missed the cut, you still have to file a tax return there with all your travel receipts and pay taxes on that income. Play in 25 tournaments in 20 different states and you are filing 22 tax returns. Don't forget your home state and the Feds.

You can read the rest Maginnes' tax troubles here.

Worldwide jock tax concerns: The jock tax is not limited to the United States. Just ask the footballers (aka athletes we colonists call soccer players) that David Beckham left behind when he joined the L.A. Galaxy.

The Union of European Football Associations (UEFA) has rejected a bid by Wembley to host the 2010 Champions League finals because of a new interpretation of United Kingdom tax laws that would tax players from non-U.K. clubs on money earned while playing in the country.

UEFA has revealed it awarded the final to Real Madrid's Santiago Bernabeu Stadium rather than the new Wembley stadium because of the change.

"The reason is the taxes," said UEFA president Michel Platini. "The concerns we had over players being taxed were minimized by the English FA, but not confirmed by the British Government."

UEFA's decision would be like moving our Super Bowl from Franklin Field to Miami because Pennsylvania collects a jock tax and Florida doesn't. (And yes, I know, the chances of a Super Bowl in Pennsylvania in early February are remote, but you get the idea.)

Telecommuters, too: And some of us don't have to be highly-paid athletes to get hit by another state's tax laws. Heck, sometimes we don't even have to set foot in the taxing state to end up owing. 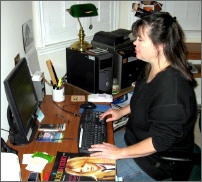 In fact, telecommuting workers (like me there to the right) are now a prime, and potentially larger sheer numbers-wise, tax target of some cash-strapped states. I blogged about this situation back in February 2006 (here). Now I have firsthand experience with it.

That state's law says it can tax all Georgia-source income. That means if the compensation is issued by a Georgia-based payer, the recipient, regardless of his or her legal tax residence, must pay a portion of the earnings to the Peach State's treasury.

I know this because the hubby works for a Georgia company. The fact that he does his work from his Austin, Texas, home office makes no difference. Each of his paychecks has a chunk withheld for Georgia taxes.

So even though he uses no Georgia services and doesn't clog up Georgia highways getting to the office each weekday, he (and by he, I mean we) lose a sizable amount of our previously disposable income to a state a thousand miles away.

Worse, since we don't have a state income tax here in Texas, we don't even get a chance to take a credit for those Georgia taxes on a state tax return.

And adding insult to injury, Georgia businesses get a tax break for encouraging their employees to telecommute. Workers, however, are not afforded any such reciprocal tax consideration.

Telework legislation pending: I'm not alone in my frustration with this tax. The Telework Coalition keeps track of unfair interstate taxation of telecommuters. And it's still trying to get the Telecommuter Tax Fairness Act passed.

Introduced by Rep. Christopher Shays (R-Conn.) in the House and Sen. Chris Dodd (D-Conn.) in the Senate, the legislation would prohibit states from taxing nonresidents on the income they earn when they work from home. The measure has support in both federal legislative bodies and has garnered endorsements from both telework and taxpayer advocates.

We did deduct the Georgia state taxes on our federal 1040, as that amount was greater than our allowable Texas sales tax deduction. But it's small consolation.

And I also hope that IRS return processors don't get confused when they see that we residents of Texas, which has no state income tax, are claiming a state income tax deduction.

I'm already irritated enough with Georgia's greedy hands in my tax pocket. I definitely do not need the added aggravation of it causing problems with my federal return!

Quite a few years ago I got pretty involved with a court case here in Alabama concerning out of state truckers. Alabama wanted to tax folks who lived in Florida but worked for trucking companies (as drivers) in Alabama. They would come to Alabama, pick up their loads (or trucks in some cases) and deliver country wide returning their trailers or loads or trucks to Alabama later in the week. We won that case totally but I have often wondered why the legal beagles here in Alabama never pointed out that (at least for some of the time) the trucks were using Alabama roads and were home based in Alabama. But I guess that is 1 for an accountant and 0 for a bunch of state lawyers......

And how would Texas ease our Georgia tax burden? As I noted, we have no state income tax here, therefore no tax forms to file. So the state should set up a costly program to administer taxes paid to other states? Rather, states should collect revenue on work actually done in those states.

The Lone Star State is not alone; six other states also don't tax income, so telecommuters in Alaska, Florida, Nevada, South Dakota, Washington and Wyoming, as well as in New Hampshire and Tennessee, which tax only dividend and interest income, pay taxes that they have no chance to recoup.

I understand the jock tax. When a person goes into a state it's like the nexus basis for collecting sales tax on catalog or online purchases. Physical presence is the argument for taxation on the grounds that for at least a while, that person used that state's services.

Telecommuters don't use the other state's services. In fact, the state gets tax money and no additional burden on it to pay for a physical demand on roads, utilities, etc. As noted, businesses in Georgia are encouraged to have workers telecommute to save resources. But we are not using Georgia resources. We are using Texas resources and losing income that might spend in Texas.

As to your astronaut reference, yes they pay taxes based on their federal tax home; i.e., where they spend the majority of their time and have a physical residence. That means they pay on federal earnings they receive in Texas where many astronauts are based out of Johnson Space Center or Florida at Cape Canaveral. If an astronaut happens to live in a state with a state income tax, he or she also would owe those state taxes because of their residency. But they are not taxed by Georgia or New York or Iowa because they fly over that airspace.

Also, as to your argument that my husband's work is limited in its benefits to his Georgia employer and the state's residents, that's simply not true. He manages a Web site which is accessed worldwide. So by your reasoning, we should have to pay taxes not only to Georgia, but New York, California, Montana, New Mexico, et al, along with Europe, Asia, Australia and all the other countries from which people click on the site.

Also, I'm not sure what you mean by the whole rest of the country is hip to the working remotely thing. So are we here in Texas, where a vast number of us work remotely, both for companies in the areas where we live (a neighbor works from home rather than commute to another part of Austin) as well as for companies based in other Texas cities and other states. Taxation or lack thereof doesn't indicated "hipness" vis-à-vis telecommuting.

By your standards, then, the other eight other states with no income tax mechanism also are "not hip" to telecommuting. If you want to slam Texas, I'm sure you can find some other avenue.

I think you should direct your anger at Texas for not allowing you to recoup what you've paid to Georgia.

What's being taxed isn't your physical presence in Georgia, it's the work hubby does for Georgia (after all, it's the people there who receive the benefit of his work). For all intents and purposes it makes no difference whether his workstation is at home in Texas, or in Atlanta, if he works for Georgia, he's taxed by Georgia, simple as that. Even astronauts have to pay taxes for the time they're not on Earth.

So, aim your wrath at Texas for doing nothing to ease your burden (the rest of the country is hip to the whole working remotely thing).

Thanks to our great government that outside people are easier to employ than Americans. You can see once again our elected people are out of touch with normal business today. We need to vote more of these people out of office instead of re-electing them.

Multiple state taxes and the alternative tax is killing us as telecommuters and contractors. I work hard for my earnings many hours - just to loose 40%+ in taxes.

I can hardly wait for the new government programs for healthcare, keeping people in their homes etc. What about lowering the GAS tax to help the citizens of this country? Perhaps we need to outsource WASHINGTON!

Hi Kay
I was away for about 10 days - vacation. Well, it is back to office and taxland from Monday.
Am so glad that we do not have State level Income tax in India, it would have been chaotic - with different returns in different languages, forget loss of tax credits.
Best wishes for the taxing times.
Lubna

Insanity we have faced too. It is so much easier to contract someone who is OUTSIDE the USA, as you don't have to spend nearly the effort trying to figure all this out!

For a contractor outside the USA: a simple invoice and non concern that the IRS is going to try and re-classify them as an employee. Of course there are international legal issues, but the taxes are a lot simpler to flesh out.

This is just horrible, we are no longer the land of the free. You spend so much time learning the rules and regulations that you can't just work by yourself. You need to fund an army of tax consultants and lawyers.