There's a standing joke on Capitol Hill that the official subtitle of every tax bill is "The Accountants Full Employment Act."

The reason: Every tax legislative effort seems to add complexity, even those legitimately aimed at simplifying our tax tasks. And that results in added pages to the Internal Revenue Code.

That code growth was mentioned on Tuesday (and blogged about here) by the supporters of the HR 5719, the Taxpayer Assistance and Simplification Bill of 2008. I'm not sure where the 10,000 figure cited by the House Democratic leadership came from, but it looks to be about right, judging from data collected by the CCH Standard Federal Tax Reporter.

Seeing is believing: Below is a one-page graphic showing the number of pages in the tax code from its inception in 1913. That year, the code contained 400 pages. That number held pretty steady until 1945, when it ballooned to 8,200 pages. 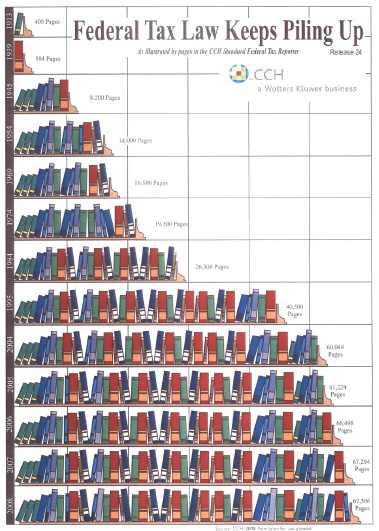 Tax code history: You can read a brief history of the Internal Revenue Code at this IRS Web page. There you'll also find a link to the 1913 Form 1040 (or you can can click here now to view it).

The 1913 document was two-page form, just like today's version, although the 2007 form is a little more packed with lines.

But the 1913 instructions were included as part of the form and took up just two more pages. Today's 1040 instruction booklet is 155 pages.

Flat tax prompts: Displays like the CCH graphic and the original Form 1040 are what drive folks who argue for a flat tax. While I do believe the tax code could be trimmed and yes, made simpler, I'm not a big flat tax fan. I believe the progressive system we have is inherently fairer.

Flat, or consumption, tax advocates say the process would be simpler, reducing the government bureaucracy by eliminating loopholes. They also contend that it's more fair if everyone is taxed at the same rate.

A progressive tax system as we now have takes such disparities into account. A flat tax exacerbates them. A flat percentage loss of, say, 15 percent of income weighs more heavily on the lower income earner. However, a wealthier individual would be more equipped to deal with that percentage payment and still have substantial discretionary income left over.

William G. Gale offers a good analysis of flat tax proposals in this article posted at The Tax Policy Center. He writes:

"A central issue in tax reform is always who wins and who loses. Under the flat tax, low-income households would lose because they now pay no income tax and are eligible for a refundable EITC of up to $3,370. Although the flat tax is more progressive than a VAT, it is more regressive than the current system. A flat tax would provide huge gains for high-income households, both because their marginal tax rate would fall and because they consume relatively less of their income than do low-income households. As a result, if a flat tax were to raise as much revenue as the current one, the tax burden for the middle class would have to rise. Consumption taxes are generally less regressive when viewed over longer periods of time because income changes from year to year, but they would raise tax burdens on lower- and middle-income households over any time frame.  …"

There's also the human penchant for tinkering that could be problematic when it comes to any tax simplification efforts. As Gale notes,

"… [F]undamental tax reform would not end the demands for special treatment that have so tangled the income tax. Ten years hence, we may find that what started as simplicity has once again become a confused jumble. Thus some simplification is likely with tax reform, but it is by no means a certain or lasting outcome.  …"

And that would mean that regardless of the tax system, those tax code pages would likely start to add up again.

All of your arguments against consumption taxes,(you don't mention Fairtax) can be explained away at this site, if you were to take the time to read it.

You admit the IRS tax code is terrible, but you want to keep it? Sounds like you are like so many others that just want to show their ability to think beyond the thousands of tax accountants and economists that have already researched the Fairtax.

How ever, since this is one of those moderated forums, you likely will not publish any thing that in your mind takes away from the brilliance of your post.