Home Table of Contents Tax Tips Credits Deductions Refunds State Taxes Politics/Laws Tax Terms Archives
It's over! For most of us, anyway
The out-of-control tax code

Every April 15, lawmakers look to highlight the concerns of John and Jane Public. It's not that I necessarily doubt their sincerity; I'm sure that some in Washington really do want to improve the system and process for us all when it comes to paying for our government's operations.

But I just wish rather than using the tax-filing deadline as a publicity tool, legislators would work on tax issues year round and come up with some changes that actually get implemented.

Take yesterday's latest version of a taxpayer bill of rights. By a vote of 238 to 179, the House approved the Taxpayer Assistance and Simplification Bill of 2008 (HR 5719).

Good job, guys. Now we just have to wait for the Senate to follow suit so the bill can go to the White House for the promised veto.

Despite the doomed prospects, Representatives put on a good front, as well as tried to score some political points in this election year. House Majority Leader Steny Hoyer (D-Md.), pointing to a tax code that has grown by more than 10,000 pages between 2001 to 2006, said the bill is needed to undo tax code complexity created by the Republican-controlled Congress and the Bush administration.

Against private debt collectors: A key part of the bill, which was introduced by House Ways and Means Oversight Subcommittee Chairman John Lewis (D-Ga.), would prohibit IRS use of third-party debt collectors to bring in unpaid taxes.

Opponents of the debt collectors (notably Lewis, as blogged about here) argue that the private agents are not as efficient as IRS employees and actually cost more money than they collect. They point to a Government Accountability Office study that found some debt collectors made unnecessary calls to taxpayers just to meet call volume goals.

Dubya et al, however, still support the private collection agents, part of the Administration's larger goal of privatizing as many government tasks as they can.

So the debt collector provision alone would prompt the prez to pull out his veto pen.

HSA language problematic, too: However, the White House also opposes a provision in the bill that would require that Health Savings Account (HSA) distributions be verified as used for medical expenses. 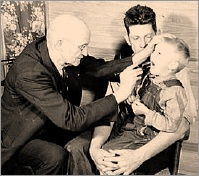 Opponents say such reporting requirements for HSA trustees is "unnecessary for efficient tax administration, inconsistent with the flexibility purposely afforded HSAs at their inception and could undermine efforts by employers, individuals and insurers to reduce health care costs and improve health outcomes by empowering consumers to take greater control of health care decision-making."

More on these and other provisions in the latest Taxpayer Assistance and Simplification Bill can be found in this report from WTOP radio and this CNNMoney story.

As for the prospects of legislation to make our taxpaying lives easier, expect lots more posturing leading up to November, but little real action from either side.

If the Gov't hired a collection agency to collect delinquent taxes, it would be interesting to see if they followed the federal fair debt collection practices act. If so, it wouldn't be very easy to collect (at least fully) from those who know the law.