Even non-baseball fans know the story. Gino Castignoli, a Red Sox fan and construction worker from the Bronx, dropped a David Ortiz Red Sox jersey in wet concrete during the building of the new Yankees Stadium.

Castignoli's hope was that the hidden apparel would curse the new ballpark and its home team. 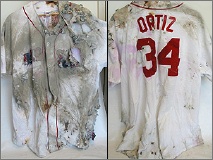 Well, Castignoli just couldn't keep his mouth shut (dang it!) and when Yankees management heard about the amateur voodoo effort, the #34 jersey was chipped from the concrete.

I know this comes as a big surprise, but some folks connected with the Yankees actually have a decent streak. They decided to auction off Big Papi's uniform top with the proceeds going to The Jimmy Fund.

The Boston-based nonprofit supports efforts to fight cancer. The Red Sox have been associated with The Jimmy Fund for more than 50 years.

At the close of the eBay auction last Thursday, Kevin Meehan's winning bid of $175,100 netted him not only the Ortiz jersey but also two tickets to a 2008 Red Sox home game.

It's at that game that Meehan, of Mendon, Mass., will actually be presented with the "curse" jersey, along with a new Ortiz road jersey and a New York Yankees t-shirt. Two outta three ain't bad.

The ceremony will be sometime in mid-to-late May, as the unearthed jersey will be on display until at least May 18 at a Boston sports museum. During that time, Meehan can get some advice on just what his winning bid might mean to his taxes.

Taxes and the jersey bid: The issue of whether Meehan can deduct most of his $175,100 bid as a charitable contribution has been subject of much debate among the tax professors and lay folk who frequent TaxProf Blog.

You can read TaxProf's original post on the sale as well as the comments discussing the above and other tax issues here.