Sorry for that headline. Love the alliteration, but disagree (as detailed in this blog post) with those who use impending mortality as a semantic tool to get the estate tax repealed. 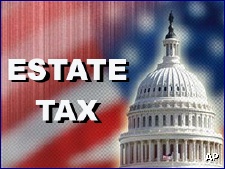 Actually, the the estate tax will soon disappear, but for one year only in 2010. Then it is scheduled to go back on the books in a more stringent incarnation the following year.

As blogged previously (here and here), lawmakers have been fighting, mostly along party lines, on how to deal with this tax, both in the near and long terms.

In his opening remarks, Committee Chairman Max Baucus (Dem.-Montana) expressed hope that he and his colleagues could take an outside-the-box look at the current estate tax laws and potential bipartisan reform possibilities,

Good luck with that bipartisan goal, Mr. Chairman. But Baucus got it right when he noted that the estate tax laws are complicated, intimidating and, thanks to temporary law changes, uncertain in application.

As for ways to deal with those estate tax concerns, today's hearing looked at taxing beneficiaries, income exclusions and how other countries tax estates. The witnesses were three tax professors:

Click on the profs' names to read their formal testimony.

Additional information: In conjunction with the hearing, the Joint Committee on Taxation (kudos for a much improved Web site design, by the way) released the document Description and Analysis of Alternative Wealth Transfer Tax Systems.

You can read Baucus' pre-hearing statement here, as well as the release he issued following the session here.

And if you've got about an hour and a half, you can watch the hearing here (RealPlayer required, and it takes a few minutes to download even at high ISP speeds).

I have the hearing playing in the background as I type this. Not to worry KPLU and KUT; SFC will not replace y'all on my Internet radio dial!