Not only did the Giants upset the Patriots in Sunday's Super Bowl, the New York football players and their betting fans upset the bookies, too. 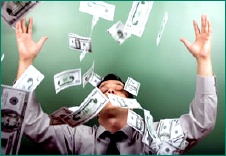 Jay Kornegay, the executive director of the Las Vegas Hilton race and sports book, told the Associated Press that "the anticipated large wagers that we expected on the Patriots just never materialized."

The total amount bet at Nevada's 174 sports books was the third-highest amount ever, but down for the second consecutive year after a record $94.5 million was bet in 2006.

The last time the casinos lost money on the Super Bowl was in 1995, when the San Francisco 49ers blew out the San Diego Chargers, 49-26. That year Nevada books lost $400,000, according to the state's Gaming Control Board.

Even if you adjust if for inflation, I'm betting that the '95 loss is no where near the beating bookmakers took this year.

Sharing with the IRS: As I mentioned pregame last week (here), gambling winnings are taxable federal (and in most cases, state) income. So before you spend all of your big payout, take some time to make tax plans so you don't find yourself owing a big 2008 IRS bill.

If you were one of the big Nevada winners, next year about this time you'll be getting a Form W-2G detailing your good fortune.

But before that arrives, you might want to think about making estimated tax payments to report your unexpected income and pay the taxes on it in a timely fashion.

OK, I apologize. It wasn't unexpected; you knew the Giants were going to win.

And if you continue to bet in 2008, keep track of your losses as well. You can use the bad days at the casino, poker table or horse track and even those losing lottery tickets to offset your big winnings and lower your tax bill a bit.

This story has a bit more on the ins and outs of reporting your gambling winnings.

Very cool, thanks for sharing

I still cant believe this game was under 54 pts. I had a feeling the GMen would pull it out though.

Interesting stats... I was wondering how Vegas fared this year since that was quite an upset (congrats Giants!). Thanks for enlightening me ;)