A major tax scandal is playing out in Germany, with the New York Times reporting that "prosecutors there are investigating hundreds of people, including several who are household names, on suspicion that they evaded taxes by steering money to Liechtenstein, a postage-stamp principality known for its striking Alpine scenery and discreet banks." 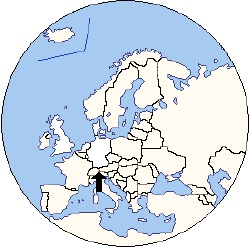 Postage-stamp might bit generous Liechtenstein's size. at the top (there's a minuscule red dot there, too, that you might be able to see if, like me, you put on your reading glasses) in the map to the right. Click on the image for more about the country.

Land mass notwithstanding, Liechtenstein's banks obviously are big enough. The lure of that tiny tax haven, as well as other Alpine retreats for the rich and famous looking to shelter their gazillions from their home countries' tax collectors, was blogged about more than a year ago here.

In this latest instance, Klaus Zumwinkel, chief executive of the German postal service, resigned last week after a police raid on his home. He is suspected of stashing cash in Liechtenstein to evade $1.46 million in taxes.

Click here to read all about the tax investigation, which the NYT says is causing "ripples … far beyond Germany's moneyed elite, inflaming the suspicions many ordinary Germans have long felt toward well-paid corporate bosses and the free market in general."

And a separate story (here) looks at how the German political establishment is quickly distancing itself from Zumwinkel. Politicians of both parties have called for tougher sentences for those convicted of tax fraud.

See, politics is the same worldwide.

Liechtenstein? I've heard of it; isn't that where Dr. Doom lives?

That's terrible the German's have to leave their country to evade taxes and create income disparity between the rich and the working class. Here is the US the tax code does it for them.