The IRS announced today that it is considering new rules on the marketing of refund anticipation loans (RALs) and "certain other products" in connection with 1040 preparation.

The IRS can't ban such products, but it can tighten its rules, and penalties for violating them, in connection with the high-fee/high-interest loans. In that regard, the agency is considering prohibiting tax return preparers from "obtain[ing] a taxpayer's consent to disclose or use tax return information for the purpose of soliciting taxpayers to purchase such products." 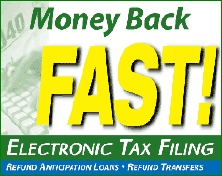 This is the latest in the IRS' tougher stance toward such tax-related loans. Last year, tax software companies that participated in the Free File Alliance weren't allowed to market RALs as part of their free e-filing packages.

Free File members insist they took that step voluntarily (blogged about here), but if you don't think the anti-RAL action was hurried along by the IRS in the wake of complaints from consumer groups and some members of Congress about the short-term loans, then I've got some of that mighty fine Florida swampland to sell you.

In today's advance notice of proposed rulemaking (another good gov'ment acronym for you: ANPRM), the IRS says it is "concerned that RALs and certain other products may provide tax preparers with a financial incentive to take improper tax return positions in order to inappropriately inflate refund claims."

Did you hear that big "Duh!"? It was from those aforementioned consumer advocacy groups.

"In general, RAL amounts are capped by the amount of the refund claimed on a tax return," says the IRS. "Therefore, a preparer who inappropriately inflates the amount of a refund is able, directly or indirectly through arrangement with a RAL provider, to collect a higher fee."

Death and Taxes has a good overview of how costly these loans can be.

EITC et cetera issues: Federal revenue officials also are concerned about the connection of RALs and the earned income tax credit (EITC), specifically "that the financial benefits of selling a RAL to a taxpayer can create an incentive for the preparer to not fully comply with due diligence requirements to ensure the accuracy of EITC claims."

A RAC is a post-refund check that allows a taxpayer to pay for tax prep services out of their refunds. Audit insurance is self-explanatory, but many consumer advocates question its value.

In fact, the IRS notes that taxpayers who purchase the insurance might tend to take more aggressive filing positions since they feel like they're covered if the agency ever questions the tax moves.

"The Treasury Department and the IRS generally believe that arrangements that create financial incentives for taxpayers or tax preparers to exploit the audit selection process undermine tax compliance."

Did you hear it again? Another "Duh!"

Market reaction: Forbes reports that shares of both H&R Block and Jackson Hewitt fell Thursday after the companies were mentioned in a note from Thomas Weisel Partners as tax-service providers that could be "negatively impacted" by the proposed RAL-tax data restrictions.

America has always been about choices. 7216 requires that disclosures be not only signed and dated, but kept on file for 2 years afterwards. The IRS routinely audits preparers to make sure they're in compliance of this. If people STILL aren't reading the whole contract their signing, who's to blame? Are we still fixated on warning people that the coffee that just came out of the coffeemaker is (DUH - to use a term from this article) very hot?

Recently the major RAL banks have capped RAL APR at 36%, in an effort to save the RAL.

I can understand the concern from Congress about making sure that the details are being brought out to daylight, and the RAL industry certainly isn't perfect, but there's also something to be said about choice, and America has always been about people having choices like I previously mentioned.

Those ethical tax preparers you mentioned in your post, those are the tax preparers that can remain competitive with larger firms. Companies such as mine, which are tax prep software companies that have partnerships with RAL banks, are there specifically for the mom-and-pop shops that cannot compete with JH and HRB without offering bank products.

The side effect of this consumer advocacy action is just making it harder for non-fast-food-chain preparers to make a decent living, because the only thing that's going to happen is those big companies like HR Block will just open up their own banks to finance their own RALs then we'll all be screwed.

With all of these changes, to still believe that people are being 'taken in', is silly. You should take on payday loans. Those are much more nefarious and don't come with as nearly much regulation as RALs do.Remember, we have the IRS breathing down our necks.

Just be careful what you wish for.

I sincerely hope that the IRS does forbid tax preparers from offering Refund Anticipation Loans, and have said so in many venues over the years.

In my 35 years of preparing tax returns I have never offered Refund Anticipation Loans to clients, and never will.

The Refund Anticipation Loan is bad financial policy and definitely not in the best interest of a tax client. RALs are expensive, and are being pushed upon lower-income taxpayers by unethical “fast food” tax preparation chains like “you know who”.

I do believe that the majority of tax preparers are ethical and do look out for the best interests of their clients within the context of the law. Many of these ethical preparers feel that they must offer RALs to clients in order to remain competitive, even though I am sure they would rather not have to involve themselves with such usury. These preparers properly explain the true costs involved with a RAL and often offer such products at a better rate than Henry and his brother, etc.

Unfortunately, most lower-income taxpayers are tempted by the tv ads that do not say that a certain tax preparation chain will prepare a tax return properly - but only that you can walk into their office and walk out with a check! Plus, I do believe that lower-income taxpayers have the false impression that a fast food chain service will be less expensive than going to an individual tax professional.

If the IRS forbids all tax preparers from offering RALs then the ethical preparers who do so only reluctantly not have to worry – no other preparation service or office will be able to offer them. When an ethical preparer tells a potential client he/she do not offer RALs they cannot take their business down the block to someone who can.