December's days are dwindling, but there's still enough time to make some last-minute moves that could save or make you money.

So this week here at the ol' blog we're posting a five-part series on Year-end Money Moves. Monday through Friday, we'll look at some key financial tasks to complete by Dec. 31. 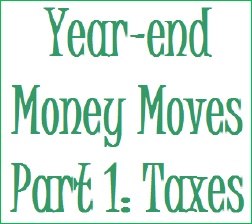 And  we'll wrap up the series Friday with end-of-year tasks to help you tie up financial details.

Some of the strategies cross boundaries. For example, selling assets that have lost value could help lower your tax bill; so does donating to your favorite charity. These are mentioned in today's money moves, but will also be examined further in the investments and giving postings later this week.

So, without further ado, here's Part 1 of the Year-end Money Moves: Taxes.

Do a dry run
Some surprises are great, but tax surprises usually don't fall into that category. So while there's still time left in the tax year, do a projection of your tax liability. Gather your pay stubs to date and look at your 2006 return to see if your 2007 return will be substantially the same. Don't forget to count any other income you received or expect to get by year end, such as side jobs or investment earnings.

Adjust withholding
If your review/preview indicates you're going to come up way short on your withholding, head to your payroll office. At this late date, your best move might be having your boss take out a specific dollar amount (you can indicate a specific extra amount on the new W-4 you file), rather than changing your allowance number.

Do an AMT analysis
Your review also should help you determine whether you might have to pay the alternative minimum tax this year. Congress is working on a short-term patch which will keep millions of taxpayers off this costly parallel tax system's rolls, but … . Deductions are key considerations; some write-offs that are OK under the regular tax system are not allowed under the AMT. If you find you'll be paying AMT, you don't want to make moves that would push deductions into a tax year where they would be useless.

Accelerate itemized deductions
It's generally helpful to accelerate deductions into the current year by prepaying some of next year's deductible expenses and deferring income, where possible, until next year. If you itemize, you can bump up your charitable gifts, make your January mortgage payment early to push the interest deduction into 2007 or pay any state estimated taxes this month, too.

Also examine medical and dental expenses. You can deduct those that are more than 7.5 percent of your adjusted gross income; for example, a taxpayer earning $50,000 must come up with medical costs that exceed $3,750. If you're close to your threshold limit, look at ways to get past it: schedule elective medical procedures, buy an extra pair of glasses or contacts, have some dental work done.

Remember, though, to keep the AMT ramifications discussed earlier in mind.

Take advantage of above-the-line deductions
These expenses, which are claimed directly on Form 1040 or 1040A and don't require you to file a Schedule A, include such things as IRA and Health Savings Account contributions. You get to subtract those amounts from your income to determine your adjusted gross income (AGI). Lower AGI can help lower your taxable income. True you can wait until April to contribute to an IRA, but the sooner you put money in, the sooner it starts earning. More on this tomorrow.

Add insulation to your house
Or put in thermal windows or simply add sun-blocking film to your existing widows. All of these energy-efficient home improvements could get you a tax credit. The key is to make the upgrades by Dec. 31. This Energy Star table lists the home improvements that are eligible for the credits.

Purchase a hybrid
Tax credits also are available to buyers of hybrid vehicles. If you've yet to get one and want a Toyota or Lexus, you're out of luck. That automaker already has sold enough to meet the 60,000 limit at which the credit phaseout kicks in and its credits were zeroed out on Oct. 1.

Honda also has hit the target, meaning its credits amounts will be cut in 2008. So if you want a Honda hybrid and the biggest possible tax break, drive one off the lot by Dec. 31. On Jan. 1, 2008, the credit is cut in half. Click here for Honda's 2008 phaseout schedule.

Hi, I am really glad to see your website. Thanks for providing this article. For related information on home mortgage financing strategies just login here http://mortgagepronews.com/mpn-certified-resources.html

I think that I'm going to qualify for the AMT this year. Is there anything I can do (besides donating money I don't have to a non-profit) to avoid it?

I like your tips. I'm a tax professional in WI and I understand these topics but you are able to break these down to simple terms for most laymen to understand. I'm going to share this with my readers at newlycoporate.com. I look forward the rest of this series.