The Bible and taxes, then and now

The reason for today's celebration is told in the Gospel of Luke (Chapter 2, verses 1-7 below; King James Version): 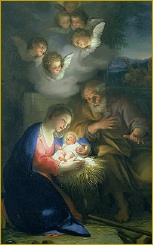 And it came to pass in those days, that there went out a decree from Caesar Augustus, that all the world should be taxed. (And this taxing was first made when Cyrenius was governor of Syria.) And all went to be taxed, every one into his own city. And Joseph also went up from Galilee, out of the city of Nazareth, into Judaea, unto the city of David, which is called Bethlehem (because he was of the house and lineage of David) to be taxed with Mary his espoused wife, being great with Child. And so it was, that while they were there, the days were accomplished that she should be delivered. And she brought forth her firstborn Son, and wrapped Him in swaddling clothes, and laid Him in a manger because there was no room for them in the inn.

While there's still some theological quibbling over the use of the word "tax" -- some say the more correct term is census, "though a taxing often followed based on the census or registration" -- taxes are often mentioned in the Bible.

Now an Alabama tax professor and divinity school graduate says that the 50 U.S. states, "in contravention of her view of biblical injunctions, do more to burden the poor and relieve the rich than vice versa."

In a story in today's New York Times -- Professor Cites Bible in Faulting Tax Policies -- Prof. Susan Pace Hamill of the University of Alabama Law School, says "that since Judeo-Christian ethics 'is the moral compass chosen by most Americans' it is vital that these policies be compared with the texts on which they are based."

Among her findings, detailed in her book As Certain as Death: "18 states seriously violate biblical principles in the way they tax and spend. She calls Alabama, Florida, Louisiana, Nevada, South Dakota, Texas 'the sinful six' because they require the poor to pay a much larger share of their income than the rich while doing little to help the poor improve their lot."

As expected, Hamill's religious take on taxes is generating as much discussion and controversy as the good book itself.