Adults-only entertainment has long been a target of lawmakers. And recently, such establishments won one and lost one when it comes to state taxes.

Some "adult entertainment cabarets" in Chicago and Cook County were improperly denied a tax exemption simply because of the nature of their shows. That was the ruling last week by the 1st District Appellate Court in Chicago.

At issue were identical city and county ordinances passed in 1999 that exempted small venues from paying Chicago's ticket tax and Cook County's added tax. The exemptions were designed to give a break to music clubs and theaters with audience capacities of fewer than 750 people.

But the laws specifically stated that "adult entertainment cabarets" must pay the taxes.

That, wrote Judge Margaret O'Mara Frossard, amounted to "content-based regulations on speech that do not serve a compelling state interest and, therefore, violate the 1st Amendment."

The lawsuit challenging the ordinances was filed in 2001. In 2005, a trial judge ruled in favor of the city and county. The appellate court's ruling reverses that decision. Read more on the case in this Chicago Tribune story. 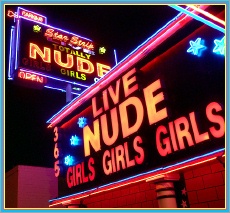 Around 150 Lone Star State strip clubs will soon have to pay what is being called the "pole tax." On New Year's Day, the clubs must start collecting a $5-per-customer levy, with most of the proceeds going to help rape victims.

But despite the good cause, club owners and customers say the tax infringes on their First Amendment right to freedom of expression. The businesses have already filed suit to block the tax.

State officials say they are not out to close the clubs. In fact, a continued healthy business will help raise more than $40 million a year (based on liquor sales figures) that will go toward the fund to assist sexual assault victims.

"This is an industry that largely employs women, and this gives them an opportunity to raise funds for a crime that affects women," said state Rep. Ellen Cohen, a Houston Democrat who sponsored the bill.

That connection, however, has upset not just club owners, but also some employees and customers. Patrons say they resent the implication that strip clubs lead men to commit sex crimes. And some performers at smaller clubs worry that the tax, which is likely to be passed on to customers through increased cover charges or higher prices on drinks, could cause some venues to close, costing them their jobs.

As for the constitutional opposition, club owners say in their lawsuit that nude dancing is protected by the First Amendment and Texas can't selectively tax it, even if it is conduct some may find offensive.

Plus, they say the tax is so broad it could apply to concerts by performers like Madonna or Britney Spears who wear low-cut tops.

More on the Texas pole tax in this Associated Press (via the Los Angeles Times) story and at A Blog For All.

Personal vs. public policy: I understand that all state and local governments are feeling financial pinches, but I have a problem with taxes that target industries (and individuals) based on what are so obviously "moral" grounds.

I find a lot of legal activities offensive, but that shouldn't be the basis for tax policy. And I'm sure some things that I think are OK would appall many others.

Take, for instance, Hooters. Personally, I'd like to tax the heck out of these and other ostensible dining establishments that get most of their business because of female servers in tight tank tops and short shorts.

At least at clubs like the Diamond Doll (hey, Lubbockites -- is it still around?), there's no pretense about the titillation factor.

No problem in Norway: Those Europeans have such a different take on things. As blogged about here a year ago, Norway's highest court deemed  exotic dancing a nontaxable art form. In those jurists' eyes, stripping is art, just like opera or ballet.

Signage query: Why do strip clubs usually include the word "live" in their signs?