'Tis the season not of good cheer, but of obsessive credit card usage. OK, here in the United States, that's a year-round pastime.

And there are no age limits on using, and over-using, plastic.

This week Charles Schwab released its annual Teens & Money Survey. The 2007 results found, among other things, that when given a choice, almost a third of the teens said they prefer buying things with a credit card rather than paying cash. That's a increase over last year.

Twenty-nine percent reported having an ATM debit card in their own names; that's good, as long as they fully understand that the money is coming out of a bank account that's not limitless.

When it comes to charging, of the young consumers reported owning a credit card in their own names; said they have access to a charge card that's in a parent's or guardian's name. 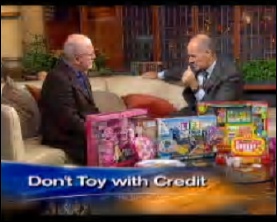 And the use of plastic by young (and younger) people is now being reinforced by some popular board games. The trend started a couple of years ago, but it's really taking off this holiday season, according to a report this week on the CBS Early Show.

Financial expert Dave Ramsey and program host Harry Smith took a look at all the toys that are not-so-subtly teaching kids to pay with plastic.

Among the games that now supply kids with fake plastic instead of toy money are Monopoly, Life, Barbie (not surprisingly; look at the clothes she buys!) and even Dora the Explorer. Can SpongeBob SquarePants be far behind?

The full article on the toy charge card trend is here; click on the video tab to watch the segment.

Setting limits for Santa: I know that Christmas is a magical time and I think kids deserve to be young and believe in Santa and the possibility of fantastic things for at least one month out of the year. But even now, there are limits.

Ramsey offers some suggestions for parents faced with the rampant consumerism urges of their children. The one that caught my eye was, "Sit down and have a talk about what Santa can afford."

Long-time readers might recall that's the message my mother used to slow down, if not stop, the "I want, I want!" cries she heard every December from my brother and me.

When our lists got out of hand, she matter-of-factly informed us that we had to prioritize. We couldn't have everything because while Santa delivers the toys, he then sends her and dad a bill to cover the costs of our gifts.

That story is mentioned in the first of Mom's money lessons. While that blog item was posted to commemorate Mother's Day, her spending tips are just as applicable seven months later, or any time of the year.

Fighting the Shopocalypse: The hubby and I sneaked out of our homes offices recently to go to a movie. One of the previews that really stood out was for What Would Jesus Buy? 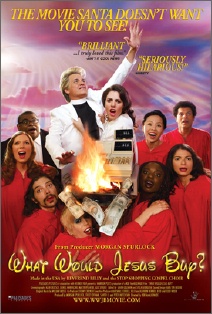 The New York Times calls it a "fast and funny documentary" that answers the film title's question with, "whatever gadget of the moment their spoiled-rotten kids are craving."

The film follows a 2005 cross-country tour of Reverend Billy, aka Bill Talen, a charismatic bleached-blond performance artist and mock evangelist.

The reviewer notes, "His get-up may be for show, but his activism is the real deal, and his mission is to fight what he calls the 'shopocalypse,' the buying frenzy Americans indulge in every holiday season."

I just hope it makes to our local theater before so some more folks can be converted to the Church of Stop Shopping.

I don't agree at all. My son has a cell phone & laptop. This is the information age. He will soon have his own credit card (with a low limit - you can do that. Tell the credit card company you only want a $50 limit on a card). My son has gotten an allowance since he was 4 years old. He has saved up his money and bought lots of things. He also puts money away for college, charity and a car. All this technology may not be what you want, but it's not going away and if we don't prepare our children early, they will be ill equiped to handle it when they are on their own. Empower them now while you can still keep a watchful eye over them. Remember, we can't help our kids too much.

OMG! A toy ATM! Have the toy makers no shame? Are the banks subsidizing them?

There's a toy out there that my daughter says she wants that my niece (two and a half) has. It's basically a toy ATM machine that makes all sorts of sounds when you swipe the card. I don't think the toy bank ever comes up empty either. They get them young now.

Debt is not in the God´s plan for our lives.

We need to discover our Almighty God. If we look at him, we will discover their good, pleasant and perfect will.

The Rev. Billy amuses and frightens me. I guess televangelists frighten me and even though I know he's not one he certainly does a good job of it. But I also think he's funny and he has a good message. :)

Kevin Rosen's article in the Kansas City Star says it all for me....

“Wouldn’t it be nice if our children grew into adulthood in a world without credit cards? Look at all the problems that would be solved in a cash-and-carry society — no gut-wrenching debt overloads, no junk mail from credit card issuers, and perhaps most important, fewer opportunities for cyber thieves to steal our identities.”

First and foremost, don’t even think about giving them a card until they can handle cash responsibly and have a firm understanding of the benefits and dangers of using credit cards. It also doesn’t hurt to help them set up something like an automatic withdrawal from their checking account to pay off the balance each month.

As parents, it is our job to educate, protect and prepare our children for the future. They may kick, scream and yell, but let’s steer them in the right direction and make them the “plastic-less generation”.

I completely agree with this. I didn't have a debit card until junior year of high school. It seems like now kids in middle schools have a credit/debit card and their own state of the art cell phone. Let's not forget that some even have laptops! What is our society coming to?