The potential tax bills of millions of investors are now in the hands of the United States' nine top jurists. 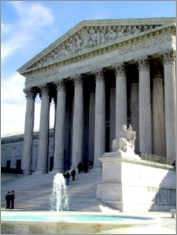 Yesterday,the Supreme Court heard arguments in Kentucky Department of Revenue v. Davis. As discussed in this earlier posting, the case deals with the issue of a state providing an income tax exemption for bonds it issues, while continuing to tax interest income realized from bonds issued by other states.

Despite the courtroom success so far of George and Catherine Davis, many legal scholars think that Kentucky's method of giving residents a tax break if they own the state's own bonds while taxing them for out-of-state bond holdings will be upheld.

If, however, it isn't, then Kentucky -- and other states whose tax systems operate the same way and who no doubt would immediately see the filing of similar lawsuits in their courts -- will have to decide whether to exempt all municipal bond income, regardless of the state of issue, or tax all such earnings.

And the thousands of managers of tax-exempt muni bond mutual funds across the country will be suicidal, ballistic or both.

The ever-comprehensive Tax Prof blog has collected links here to not only the transcript of the Nov. 5 oral arguments, but also the many media reports and other bloggings on the case's ultimate courtroom showdown.

One other thing to think about: If the Court does rule against Kentucky, some legal and tax watchers think that another common state-supported investment plan also could be adversely affected.

Many states offer tax breaks to their residents who invest in the states' college savings plans; no such tax benefit is given if the resident puts money into a neighboring jurisdiction's similar college account.

If the Davises' argument for equal treatment of state and local municipal bonds wins, some predict that the educational program tax breaks could be in trouble, too.