Moonshiners getting the OK from 'revenooers'

There's a microdistillery boom going on, with more and more homemade booze being produced across the United States. 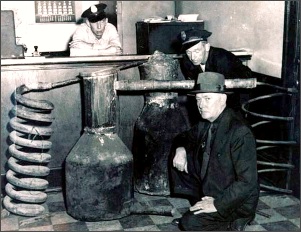 But these specialty liquor makers don't have to run from revenooers a la Snuffy Smith.

The still owners are, in fact, thriving with collector's blessing.

According to a story in today's New York Times, "some of the latest and quirkiest entrants to the industry are in places like Iowa, Indiana, Illinois, Michigan and Mr. Fox's barn."

Since Prohibition ended, states have regulated sale and distribution of alcohol, in conjunction with some federal requirements. A lot of places took stances that were barely looser than the bootleg era laws.

Now, reports the Times, "small steps have been taken toward loosening state regulation -- moves that probably have as much to do with bringing in revenue as anything going on with consumer tastes."

"Distilled spirits are a bonanza from a tax standpoint," Michigan State professor and microdistilling expert Kris A. Berglund told the paper. "I guess somebody sat down and looked at the math and said, Holy cow! We’re cutting ourselves out of the action, not to mention tourism dollars."

The Tax Foundation keeps track of key state taxes, including alcohol. Click here for 2006 rates (the latest update) by state.

Here in Texas, we're quite proud burgeoning wine industry. also got a few liquor producers, too.

Take, for example, Austin's own Texacello, which makes quite tasty orange and lemon liqueurs along the lines of the classic Italian Limoncello.

Thanks to these beverage makers for their contributions to the gastronomic world as well as the state's treasury.