Special tax rules for members of the military 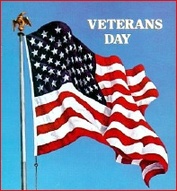 Today, Nov. 11, is Veterans Day, the day we honor our military veterans.

For a few years, Veterans Day of the Uniform Monday Holiday Act, commemorations in order to create a three-day weekend. And Monday will be a federal holiday acknowledging Veterans Day.

But 11/11 is the official day with a historical context for its existence.

Originally known as Armistice Day, the holiday was originally established to honor the end of World War I, which officially occurred at 11 a.m. on Nov. 11, 1918.

At the time, it was hoped that this convergence of elevens would be the end of the war to end all wars and Armistice Day was dedicated to the cause of world peace. Sadly, that goal has not been fulfilled.

So today, Veterans Day, take at least a moment to think about the millions of veterans who served in the quest of peace and the difficult and often devastating jobs that they did -- and our active military personnel still do -- for us all.

Tax breaks for the military: U.S. servicemen and women, whether on active duty or in the reserves, must pay taxes. But they also get a few special tax considerations.

This Bankrate.com story offers an overview of the major military tax laws, such as filing deadlines, treatment of combat pay, special rules for computation of the Earned Income Tax Credit (EITC) or determining how much to put into a retirement account and tax breaks for military homeowners who are forced to sell because of redeployment. Many of these same topics also are covered in this Military Money article.

Unfortunately, many members of the military now must pay special attention to the combat zone provisions.

Military.com provides more information on the combat pay exclusion here. And the IRS maintains a special Web page here with material on that issue, as well as a wide array of tax concerns for members of the armed forces.

More in the works: As this Veterans Day was approaching, the House last week unanimously passed H.R. 3997, the Heroes Earnings Assistance and Relief Tax (HEART) Act of 2007. The Senate is expected to take up the bill next week.

The HEART Act contains $2 billion in tax relief and would make permanent several temporary tax breaks designed to ease many of the special tax circumstances faced by military personnel, such as qualifying for the EITC and tax-free distributions from the retirement plans of active duty military personnel.

You can read a summary of H.R. 3997's proposed tax changes here.

Tax relief help is the assistance offered by various service agencies and companies that engage in tax-related matters. These companies have specialized in personnel who are typically taxation experts and attorneys who assist taxpayers with receiving the full benefits that they are entitled to under the federal and state tax-relief programs. Even though the program introduced by the IRS in 1992 allows taxpayers who are in financial hardship to settle their tax liabilities for less than the full amount, the task of interacting with the IRS can be very emotionally draining. This is particularly so in the case of tax-relief programs since most of them are aimed at low-income persons and senior citizens.