Medicine today: A man and his dog

There's not much new regarding health care in America.

We've heard and will keep hearing, at least through next November's election, about escalating medical costs, the growing number of uninsured, and how universal coverage will be the salvation or ruin of the United States. Just in case you want a refresher on the issues, at least as far as they are being addressed by the presidential candidates, you can read this story in today's Washington Post.

This weekend though, the hubby's dad provided us with a new, and very personal, perspective on medical considerations.

Seems that the recent cold fronts that have been pushing across Texas also have carried in a fair share of irritating pollen. That meant that, for the first time in his life, my father-in-law (for reference's ease, we'll call him FIL) experienced the supreme annoyance of allergy symptoms.

FIL tried to fight through them, but finally gave in and visited his doctor and got some medication. His sniffling soon stopped and all was good. 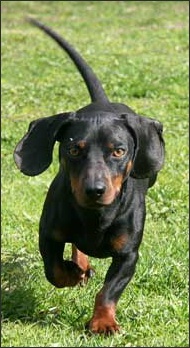 Then, a few days later, FIL's pup started sneezing. So, being a good puppy papa, FIL packed the pooch off to the vet. She was diagnosed with allergies, too, and also was given an Rx.

But what FIL found the funniest was not that he and his dachshund shared the same medical malady, both for the first time in all their years together.

Furry family members: The hubby's dad is not alone in treating his dog like another child. Americans are notorious for fawning over our pets (remember Best in Show, the hilarious mockumentary about dog show competitors?).

So it's no surprise that more people are buying health insurance for their pets. This CNN story talks about when it's a good idea and what to look (and look out) for in such coverage.

Our friends in the UK apparently are right there with us. The Thrifty Scot examines pet insurance offerings across the pond.

And back here in the U.S., the auto insurer Progressive is now providing collision coverage for customers' dogs or cats at no additional premium cost. The insurance company will pay up to $500 if a policy holder's dog or cat is hurt or dies in a car accident. Details in this Associated Press story.

Injuries and accidents are the most basic plans to be covered under pet insurance. These plans cover events such as car accidents, broken bones, burns, allergic reactions, or injuries involving your pet ingesting foreign objects or poisons.

Such plans are rather inexpensive, costing below twenty dollars a month. With most pet insurance plans, you are limited to two claims per year. Expenses related to illness or diseases are don't covered by basic accident plans.

But here progressive offering it for free thats a good news...