Who hoo, hoo-hoo, hoo is there?

Backyard birding continues to be spectacular of late, or in this latest instance, of early.

Around 5 a.m. I woke up and decided I needed a snack. Trying not to wake the hubby, I kept the lights off as I crept downstairs and made my way carefully into the kitchen. 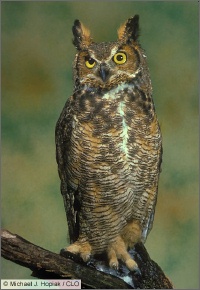 Just as I was about to head to the fridge, I head the owl.

It was a great-horned owl, probably male judging from our Peterson Field Guide's description of the call pattern. The lights were still off, so I eased my way to the back door and stepped out on our patio.

It was fantastic. There's practically no moon right now, so the stars truly were big and bright here deep in the heart of Texas. A bit of autumn briskness was in the air. Venus was brilliant as the morning star.

And it was totally quiet except for the owl.

I stayed on our patio for half an hour. At one point, the owl's calls came in quick succession. Then they tapered off. You can you can hear what I did via this sound link on the owl's Cornell Lab of Ornithology info page.

First, I thought he was atop a house directly behind us and up the hillside a bit. Then I decided he was in a big old oak tree in another neighbor's yard. This ices it; I am so asking Santa for night-vision binoculars!

As the sky brightened a bit, I thought he'd take off and I might get a glimpse of his shape in flight. Or at least hear the wing beats.

Alas, no such luck. The chill, especially with me just in my sleep attire, won out. That, and the hunger that got me downstairs in the first place. And the fact that our neighbors are early risers and I was out there, as I said, just in my night shirt, so …

But what a great way to start a morning!