MLB league championship series are underway. The NFL season is in full swing. Slap shots are flying in NHL arenas. And the NBA will start regular roundball play shortly.

So of course, the thoughts of all sports fans turn to taxes.

OK, so just a few of us sports fans are also thinking about taxes. But believe me, there is a connection.

There is, of course, the jock tax, which enables cities and states to collect a portion of the earnings of visiting professional players. Yeah, I don't get too worked up about the tax burdens of mostly overpaid athletes.

But this tax also applies to other traveling team members who likely make more along the lines of you and me. And as this MSN Money story notes, the jock tax could affect anyone:

"If you travel for work, or even work remotely for an out-of-state company, those states think you 'earned your money' there, and they want you to file a tax return (with the exception, of course, of those states that don't have a personal income tax)."

Paying for a place to play: Then there's the issue of sports facilities. For decades, battles have been waged over public funding for private sports team stadiums, ball parks and arenas. 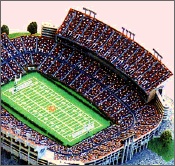 Opponents say there are many reasons to government, money for such construction. arguments follow the lines of this document produced by the Taxpayers League of Minnesota.

And last week, a high-ranking U.S. Treasury official added his voice to the no-public-money chorus.

"The cost to the federal government of tax-exempt bonds is significant and growing," Treasury Assistant Secretary Eric Solomon testified Oct. 10 before the House Committee on Oversight and Government Reform, Subcommittee on Domestic Policy. Solomon singled out for special criticism the use of the bonds for building stadiums.

The Government Accountability Office has estimated that between 2000 and 2004, approximately $5.3 billion in tax-exempt bonds were issued in about 119 bond issues to finance stadiums and arenas.

"The tax policy justification for a federal subsidy for tax-exempt bonds is weaker when state or local governments use governmental bonds to finance activities beyond traditional governmental functions, such as the provision of stadiums, in which the public purpose is more attenuated and private businesses receive the benefits of the subsidy," Solomon said.

If your football team's game has ended this afternoon and you have time to kill, you can read Solomon's full testimony here.

Me, I've got a game to watch. The Cowboys are already playing -- poorly, so far, dang it! -- but it's still early. And at least the Deadskins lost! So it's time to devote my full attention to sending psychic support to Romo and the 'Boys. I'll worry about taxes, sports and otherwise, tomorrow.