Tax cases to be heard by the Supreme Court

The Supreme Court has five tax cases on its docket for the new term, which began Monday.

A couple of them strike me as having the potential to affect "average" taxpayers.

First, there's Kentucky Department of Revenue v. Davis, which deals with the issue of a state providing an income tax exemption for bonds it issues, while continuing to tax interest income realized from bonds issued by other states.

This is a standard practice in most of the jurisdictions that have a state income tax. State tax collectors pocket a portion of interest paid on out-of-state municipal bonds, but allow their residents to avoid taxes on interest earned by bonds issued within their own state.

And then there's Knight v. Commissioner, which involves the constitutional question of deductions by trusts and estates. Specifically, question is whether federal tax law permits a full deduction, vs. a limit, for costs and fees for investment management and advisory services provided to trusts and estates.

You can find a comprehensive look at these and the other three cases at TaxProf. 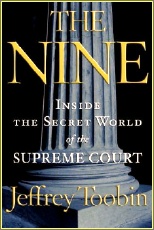 Court scoop: If you're interested in the Supreme Court itself, Jeffery Toobin has a new book out on America's ultimate legal panel.

The New York Times calls it a "smart and entertaining book." You can read the full review here.

Other reviews, as well as a video interview of Toobin, can be found at Amazon.