How do your property taxes stack up?

We got one of our property tax bills yesterday, a postal delivery I was expecting as noted in this blog item from a couple of days ago.

Yep. I said "one of." We get two property tax bills each year. Aren't we lucky?!

The one that's arrived is usually the larger one. It's from our area's school district. Still to come is the one from Travis County for its services. It's typically less by about a third than the school district property assessment.

That bill differential always makes me wonder why, if we're paying so much to our schools and I presume it's the same equation across the rest of the state don't Texas kids do better in national education rankings (like this one released last January by Education Week)? One of those great mysteries of life, I suppose.

But that's an issue for education bloggers. Let's get back to taxes.

Compare your property taxes: The Tax Foundation regularly takes the Census Bureau's American Community Survey (ACS) data and compiles illustrative tables. The versions based on the 2006 data, along with a report on the numbers, are now available.

As for the percentage-of-home-value measure, the Lone Star State tops the median amount table, as shown below with the other nine states (in red) that have a high ranking in this category. The jurisdictions in blue are the 10 lowest in median real estate taxes as a percentage of median home value. 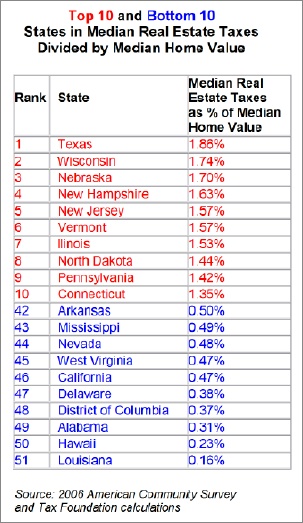 Despite Texas coming in number one in this analysis, I'm happy to report that our school district tax rate has dropped a bit from last year. So our combined 2007 property tax bill should be a little smaller.

That's very welcome news, since we pay it in December to get the deduction on the year's federal return.

But December is also the month that half of our auto insurance is due, not to mention the added costs we face for Christmas gifts.

As the saying goes, it's always something.

You can see where your state stands compared to the other 49 and D.C. here. The county property tax comparison table is here.

I live 75 miles east of St. Louis in Southern Illinois, which is for the most part an economically depressed area. Med. Income around low $20's.
I live in a town of 16,000 people, and our property taxes here are atrocious. I have friends who have had their home on the market for 3 years, a lot of interested parties, until they see the property tax bill, no thanks. The homes aren't appreciating much in value either. My taxes for a 2900 sq. ft. home were over $8000. I could live for less in a City with a lot more to offer, than what I pay to live here. Our schools have failed to met the Average Yearly Progress for the last 2 years, yet the taxes increase every year, so I pay more and get less. As a point of reference, property taxes in the Chicago area, are on average less than in our fair city south. Less population = more taxes.

Unfortunately this argument does not include state income taxes. Since state income taxes range from 1% to 4% of income (vs property value), it is difficult to compare apples to apples. What would truly be valuable would be a chart that compared the cost to live in each state for someone making $200,000 per year and living in a $500,000 home.

The piece about taxes in Texas brought back not so fond memories of living in the Austin area. Currently, I'm in Key West and have a house roughly 3 times the value of my old house back in Austin. My current tax bill is still about $300 less per year than the TX house. I still maintain a lake house outside Austin and it's tax bill is about the same as mine here in FL. Like Texas, Florida has no state income tax and our sales tax is 6.5% so I'm not sure what makes up the difference or where the money goes, but it might be a good question to ask.

I live in TX (#1 on the list above), and my parents live in AL (#49 on the list). In fact I pay around double the property taxes they pay. That doesn't sound too crazy until you realize that I live in a 792 SF condo and they live in a 10,000SF house worth almost 10 times what my property is valued! But thank God I don't live in NY or NJ where people who inherit paid off homes are forced to sell because they can't afford the property taxes.