No, I'm not talking about the fact that we don't yet have flying cars, although I'm still upset about that. I'm talking about gender and money.

Now my regular readers know that I try to avoid stereotyping. Such generalized conclusions are often wrong, frequently embarrassingly and most of the time do little to further rational conversation.

Sometimes, though, it can be useful to examine trends. 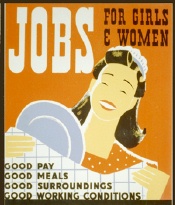 Take the workplace, for example. Working outside the home is now no big deal for women. But in my lifetime -- and I am not that old! -- such an option wasn't that typical, especially if you wanted to do something other than a "traditional" job for women. Do y'all watch AMC's Mad Men? That show's portrayal of the very different lives of men and women in the early '60s is simultaneously fascinating and horrifying.

Back here in the real world, circa late 2007, the employment options are, thankfully, much, much better. But while there are more women in more types of jobs, we still generally earn less than our male office counterparts. Which is just one of the reasons that women need to be more money conscious.

Add to that the statistical reality that women usually outlive men; insert your own joke about how we drive you guys into early graves. That means that many women who do share finances with a man for a while will eventually end up handling their money solo.

We can't forget the single women (never married or divorced) and women-only relationships. All of my fellow females (oxymoron? sexist phrasing?) in these situations are in total charge of their own money.

Where are the money chicks? So why, asked Nina the other day over at BlogHer, are there so few women in the list of top 100 personal finance blogs assembled by FIRE Finance? You remember that analysis; I happened to make the top 20 in two of the quantification models.

But, as Nina noticed, Dawn at Frugal for Life and Don't Mess With Taxes are exceptions on the list. Of the top 25, we were the only two personal finance blogs written exclusively by women.

First a caveat. You can parse numbers from sunup to sundown and come up with ratings and rankings. And you can argue about the validity of those figures even longer. But out of 100 personal finance blogs, you'd think more than a handful would be authored by women.

Money is money, whether its owner stashes it in a designer handbag, a wallet or simply stuffs in a pocket.

However, that said, and despite my previously stated aversion to stereotyping, I do believe there are gender differences in how women and men approach finances. And those differences might account somewhat for the relatively limited female presence in FIRE's list.

Even today, some gender-specific societal expectations manage to persist. That's a topic for a whole 'nother set of blogs. But perhaps some of these antiquated ways are partly behind a trend I've noticed. That is, a lot of women take a more "supportive" fiscal approach, focusing on money maintenance, holding on to what they have, instead of taking steps to advance it.

We need to get over that right now and get more aggressive when it comes to money -- making it, saving it, investing it.

The go-for-it approach seems to be more typical of male financial bloggers. Men, at least in my anecdotal observations, are more apt to be risk takers with their money. They embrace the idea that to make more money you sometimes have to take some financial risks with what you've got.

And maybe that trait means guys are more inclined than women to leap into the financial blogosphere and share their ideas on money management.

Now I admitted a few days ago to being a conservative investor. But that's relatively speaking. I am at least in the stock market. I know so many women who are content to rely on CDs, with their only equity exposure through their company retirement plan. That's not going to help them accumulate any wealth. Heck, it might not even help them beat inflation!

Girl money power: I encourage you to read Nina's post at BlogHer, as well as the comments it generated. She notes the other women PF bloggers who made the top 100 list and lists some others she recommends.

Nina was much too modest -- maybe that's another reason there aren't more women touting our financial prowess -- to list Queercents, which she founded. You'll also find fellow tax blogger Allison there, as well as several other female contributors.

I want to point out a few more women-helmed, financially oriented blogs that I particularly enjoy:

And, to make sure that the guys know I still like y'all, too, here's an item from a male PF blogger, I Will Teach You to Be Rich, on his survey and its revelation of "13 stunning differences in how men and women think about money."

You probably read the latest statistic. 51% of women are living alone these days.

Blogs like yours are much needed to inspire women. I've written 3 books on the subject, but I'm just starting to blog. Come visit me.

Kay, Great post. I admit I don't normally read your blog since taxes bore me. :) This was a great post on the differences between men & women PF bloggers/blogging.

Finally, in financial terms, risk is a rather broad topic. Inflation risk, cash flow risk, credit risk, currency risk, liquidity risk, capital risk. Even if the myth proposed (that men are more capital risky) were to survive scrutiny, there are other important risks that women (under the myth) take that men do not: holding funds in time deposits is apparently an inflation risk that women have "the balls" to take, but that men do not.

To anecdotally bust a myth, I'll disclose that I have 97% of my considerable net worth in money market accounts and 3% in domestic stocks. Being in my 30s, most would say that is "risk-averse", but I consider it rather risky: I am really gambling that the market will take a heavy downturn and I'll get a shot at cheap stocks. If you really want to open this up, maybe you'll wonder if I'm really a woman, posting as "Steve Austin"?

The most indicative thing to me about where we stand, is that only women post about gender issues and personal finance blogging.

When I was first trying to figure out a financial plan for myself, I stumbled upon the world of PF bloggers through My Open Wallet. It was encouraging for me to see how many women were taking control of their finances, and it inspired me to start my own blog. I never really appreciated how male influenced this niche is until reading your post.
As far as the issue of why women are behind in financial planning at times, I think that the knowledge of how to grow wealth is empowering, but women have been historically cut out of those conversations...like you said, it's only been recently that large numbers of women have even had their own money to invest. I think this is turning around, and the more women like you and other female pf blogger share their knowledge with women like me, the better. Thanks for this post--it's an interesting topic!

I am a relatively new female finance blogger, and I love connecting with other like-minded females out there. I run into many female bloggers/blogs, and it surprises me that more aren't on that list.

However, I think I can identify a reason that relates to some gender/money differences you pointed out. Men might me more likely to think of their blogs as businesses or income generators--meaning they are more likely to aggressively monetize their blogs, which would lead to more subscribers, more marketing, better stats, and higher rankings on various lists.

Women are probably more likely to blog just for themselves, or just to help/inform others. They are probably less likely to market their blogs and develop other more business-y blog skills.

These are obviously generalizations, but they are things i've noticed in my admittedly limited blogging career.

That's interesting, I'm actually female as well :). I was sad to have been left out of the Blogher list... I believe there are a lot more female bloggers on the list than we think... I have made the assumption on many blogs that they are male until I read that About page. :) Tricia from Blogging Away Debt, Boston Gal's, Madame X are some of the bigger blogs I know of as well. Here's to more women in the pf blogosphere!

Oh Kay, thank you so much for the endorsement. Taxes aren't my favorite subject, but I do find your blog a great resource. I'm glad you've been open to answering some of my tax questions.

FWIW, I didn't make the first FIRE Finance list, but I should have. They had a research methodology that overlooked me. If you are a PF blogger who thinks your stats are comparable, contact them. They were willing to admit the flaw and do better the next time. Can't ask for more than that.