Much attention has been paid recently to the unexpected tax bills faced by folks who have their home foreclosed. If you missed it, you my comments on the topic in this previous post.

But the neighbors who remain, who are able to make their mortgage payments, also are likely to encounter some tax issues of their own. They could end up coping with higher property taxes.

It doesn't take an advanced economics or math degree to understand that when a glut of foreclosed properties are on the market, it's a buyers' bonanza. Prices keep getting cut as banks try to unload the assumed properties.

Those bargain basement deals then mean that folks who are trying to sell because they want to, not because they have to, must drop their asking prices to be competitive.

All those lower prices lead to lower property valuations for the whole neighborhood. And that's where the dominoes start to fall.

Lower property values mean a smaller tax base. That results in either 1) fewer services that are paid for via those property taxes or 2) higher tax rates to keep the tax intake at the previous level. Or both.

When property taxes on remaining homeowners are hiked, residents who have affordable principal and interest payments could see their mortgage payments go up to cover the added escrow amount for the new, higher taxes.

The tax dilemma is mentioned in a story in today's New York Times on how the subprime mortgage crisis could decimate an entire town.

Michael G. Ciaravino, the mayor of Maple Heights, Ohio, tells the paper that his town has shut down its two swimming pools, cut police and firefighter ranks and eliminated services like free plowing of snow-covered driveways for senior citizens. 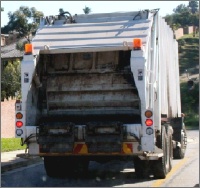 At some point, communities in these situations will essentially become unlivable.

Reduced operating revenues from less taxes will mean that there isn't enough money for services that make the place an appealing place to call home. Or, if city officials try to maintain the previous standards, the tax costs would be too much for most homeowners.

Another option: Raise other taxes, such as sales or income, to help solve the property tax problem.

The Times lets Mayor Ciaravino paint the bleak picture: "There is truly a cascading effect. The folks living next to these empty homes get discouraged, and middle-class people are leaving. … We’re not giving up the fight here, [but] It’s frustrating because this could have been avoided. We as a nation are capable of much better than this."

Good information is very important when dealing with foreclosure. Glad to see you sharing your valuable knowledge. We help people determine their best option in Colorado.

I have always wondered if there is a reliable source to stop foreclosure. We are living in an era where our natives are facing the worst ever economic

downfall in American history. I am glad you made some really valuable points about foreclosures.

Predatory lending is also a threat to deal with now a days. I am happy you wrote something worth reading about foreclosures. Foreclosure freeze for a

wrongful foreclosure is a must. Lenders should explain terms and conditions in a simple manner to home owners. This would certainly decrease the amount of

To solve the property tax problem what suggestion is given by u is well but i think this could be lead to some Home Owners but not all.

Good information is very important when dealing with foreclosure. Glad to see you sharing your valuable knowledge. We help people determine their best option in Colorado. Go to: http://www.stopforeclosuredenver.com for your FREE Colorado Foreclosure Guide

IMO this is only the tip of the iceberg.

great content, I really like this website. Also i used this short sale course to help me learn how to close foreclosure and pre-foreclosure deals. http://www.FreeShortSaleCourse.com

Few people realize the potential tax repercussions with foreclosure. It can get really ugly.

much attention has been paid recently to the unexpected tax bills faced by the people who have foreclosed their homes.But the neighbors who remain, who are able to make their mortgage payments, also are likely to encounter some tax issues of their own. They could end up coping with higher property taxes.

I am from Cleveland (the city that Maple Hts is a suburb of) and know how hard the foreclosures have hit the northeast Ohio area. There is one thing I can't understand. The county that we live in (Maple Hts included) recently did a property tax adjustment. They went and raised our property value by several thousand dollars compared to what it was when we moved in five years ago. Now, when we moved here there were no empty houses and no drug deals on the street. Now at least 6-8 of the houses on our block alone are empty, in the process of foreclosing and missing either the pipes or siding due to scrap thieves. Yet, when I went to protest the raising of our house value they said that neighborhood does not get considered when determining value. Of course that doesn't help me when I go to sell my home and have to ask for at least $20,000 less then what we paid for it. The lady across the street was told by the real estate agent to put a $15,000 asking price on her house! Anyway, sorry for the rant!