No more guessing over how much Matt Murphy owes the IRS. The bill is around $239,375. 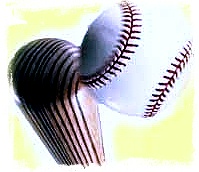 Murphy is the baseball fan who came the grandstand scrum in on breaking 756th home run ball. As soon as Murphy took possession of the orb, the debate began (at least it did among us tax geeks) as to his possible tax liability.

Was the ball a gift, as a couple of readers contemplated at my post about after Barry's blast? Or was the ball's presumptive value subject to tax even before a sale?

Murphy put an end to the parsing of the tax code this weekend when he put the ball up for auction and came away $752,467 richer.

Well, that much richer for a while. Now for the tax bite.

Taking the winning bid amount and running it through the estimated tax worksheet, using one exemption (I'm not sure of his marital status or if he has any dependents) and the standard deduction for a single filer, you come up with tax liability of almost $240,000.

Of course, Murphy probably has wage income to count, too. And his tax tax adviser I'm sure he has one might suggest he donate some of his home run ball windfall to a charity and then itemize to help knock down his tax bill a bit.

More MLB moolah: During the same auction at which the record-breaking home run ball was sold, Sotheby's/SCP also took bids on #755, the ball that tied the record. It was caught by Adam Hughes of La Jolla, Calif., a few days before the record breaker.

And remember, we're calculating federal tax liability only. Both Murphy, a New York resident, and Hughes, a Californian, have state income taxes to contend with, too.

500th milestone returned: While it wouldn't have been as lucrative as other baseball memorabilia, a fellow Austinite didn't hesitate to give back a notable home run ball he caught Sunday afternoon.

Will Stewart, an accountant from the Lone Star State's capital, ended up with White Sox slugger Jim Thome's 500th home run ball. Not only was it a milestone, it was a 9th inning walk-off homer. And, to top it off, it was Jim Thome Bobblehead Day at the ball park on the south side of Chicago.

Stewart was in the Windy City for for an accounting conference, but decided to take in a game before getting to work. While the Thome blast wouldn't have brought Bondsian bids, Stewart probably could have pocketed a decent amount if he'd hung onto it.

But the Texan had no qualms about giving the ball back to Thome.

"I feel it is a part of Chicago baseball history," said Stewart.

Estimated reminder: Murphy and Hughes don't have to worry about making estimated tax payments on their money today. Since they got the income in September, it'll count toward the fourth 1040ES payment due Jan. 15, 2008.

But if you got income between June 1 and Aug. 31 for which no taxes were withheld, send in your 1040ES voucher #3 today.

Jim Thome and other sports posters available at AllPosters.com

You're right that there are safe harbor thresholds for ES payments, which I've discussed in previous blogging on the issue and in the story link in that estimated reminder section. The mention of the Jan. 15 date was (a) to point out the different "quarters" used in the 1040ES computation and (b) to note that on the date this item went up, some folks, such as me, did have to pay estimated taxes for whatever reason (and will need to do so again in January). In my case, it's because I work for myself, making 1040ES payments my de facto withholding.

Eesh. But he's still half a mil ahead before state taxes. If he puts the money in a Roth, say, $450k at an average of 10% interest for 15 years. That's $1.8 million. Even taking inflation into account, that's more than he had before taxes. May not satisfy him, but that's a better windfall than most of us will get.